Later this year – December 15th, to be precise – will see the end of Star Wars Galaxies, the MMORPG first released by LucasArts and Sony Online Entertainment back in 2003, and the more recent Trading Card Game (2008).

So that’s the main “on-brand” competition for SWTOR gone then….
The official announcement – from the game’s official site – read as follows:

We write to you today to inform you that on December 15, 2011, Sony Online Entertainment (SOE) and LucasArts will end all services (MMO and Trading Card Game) for Star Wars Galaxies (SWG). The shutdown of SWG is a very difficult decision, but SOE and LucasArts have mutually agreed that the end of 2011 is the appropriate time to end the game.

We are extremely grateful to all of the SWG fans. We have had the rare opportunity to host one of the most dedicated and passionate online gaming communities and we truly appreciate the support we’ve received from each and every one of you over the course of the past eight years.

In recognition of your incredible loyalty, we are extending special Fan Appreciation offers to the current SWG community. We also plan to go out with a bang with a galaxy-ending in-game event in December and hope to see you all there. The details relating to these offers and events as well as the timeline and specifics regarding the discontinuation of the service, are provided below.

Again, we want to extend our heartfelt thanks to our player community for making SWG one of the best online communities in gaming history. 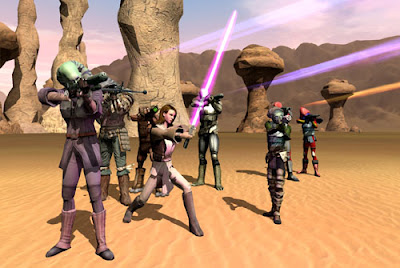 Massively sat down with SOE President John Smedley, and he said “the decision to shut down SWG is first and foremost a business decision mutually agreed upon between SOE and LucasArts. LucasArts has a new game coming out, and the contract would be running out in 2012 anyway, so we feel like it’s the right time for the game to end.””