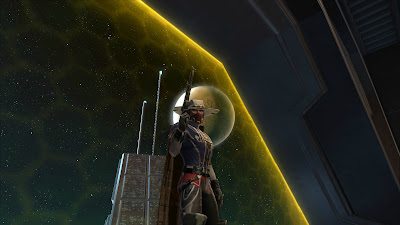 What happens when you reach the level cap in an MMO? This is what many refer to as the “endgame experience”. For many gamers, they never reach this level cap, especially if you’re not a big MMORPG fan. Some gamers pick up an MMO and grow bored of it before they reach this cap. Still others, accustomed to the WoW-style of play, will power level to the cap and then try to experience all the end game aspects before growing bored and moving on to a new game.

One self-professed non-MMO fan has made it to the level cap in SWTOR and this just might be saying something about BioWare and their ability to create a game that all types of gamers can get into. A review over at MMOMFG.com explains:

As I’ve mentioned time and again, MMOs are not my favorite genre. While I was a big, big fan of Ultima Online, I don’t really lump that into the same class as titles such as Anarchy Online, Age of Conan, Lord of the Rings Online, and World of Warcraft (all prior MMO titles I’ve played).
With every other MMO title I’ve played in the past, the same result occurred: boredom. While the games might have been entertaining in one way or another, it was either the grind (WoW), the horrible launches (AO and AoC), or the  boredom (LOTRO) that killed the experience for me.
Personally, I am an MMO fan and I still have to agree with a lot of what this guy says. So anyway, what does he have to say about SWTOR?
When Star Wars: The Old Republic was first announced and BioWare assured us that story would take precedent, I began to think that this could be the first MMO that keeps me engaged for more than a month. Lo and Behold, we are a little over one month in from the official launch date and my level 50 Sith Warrior is still kicking with the same amount of ferocity as when he first landed on Korriban. How has BioWare managed to keep my attention longer than any other MMO to date?
His first reason for sticking with SWTOR is not surprising – the story! We’ve said it time and time again but it remains true that story is one big reason why so many people enjoy the game and stick around to see it out to the end.
Another reason he gives SWTOR kudos? Less grinding!
“Whether it was from doing my class quest, partaking in some PVP, trying out a new flashpoint, or engaging in some space battles, the XP never seemed to slow down.”
And now that he is 50- the level cap- he has to ask questions he’s never asked about an MMORPG before- what to do endgame. This article/review has some great suggestions- Ilum, roll an alt, flashpoints and more.