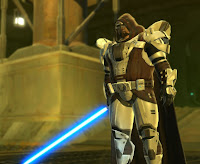 As SWTOR has been out for a couple of months now, players are taking a second look at the game to see if their early impressions were spoken too soon or if the game still lives up to the expectations we all had in the beginning.
Rival Tide takes a second look at the popular MMO and tells us what they think about it as it stands today. There are many things that have changed from the early impressions of the game. For one, online gameplay can change regularly. Patches and game updates will change and the dynamic player community will affect the game as well.
SWTOR is no exception and Rival Tide takes a look at some of the changes in the game and the community.
Some positive points: the story, the voice acting, the planets and their unique quest lines and more.
Some down points: the crew skills, the endgame and the smaller player base as the game is new.
The complaints that Rival Tide have about the game are some of the same ones the rest of us have. Some of the problems BioWare has already promised fixes to but when they will come and if they will come soon enough to keep players in the game is yet to be known.
Yet, for many players, these downsides are not game-breaking. Rival Tide says:
The main criticism which has been leveled at BioWare, however, is the scaling of difficulty from the 8-person versions of the instances to the 16-person versions. Specifically, BioWare has noted that the 8-person hard mode fights are often easier than 16-person regular fights, which was not intended to be the case. This aggravated many players when they realized that the item drops were the same between the 8 and 16 player instances, and is among the list of things that has been promised as “being looked at” by BioWare in recent weeks.
They end with this:
“A few good bug fixes, and some tweaks here and there, and Old Republic will enjoy a nice, long lifespan!”
We tend to agree. What about you?