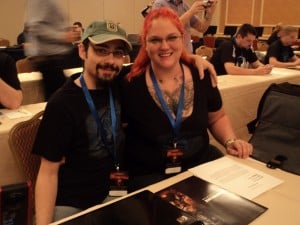 I first met Jodi and Patrick on day one of the Guild Summit in Austin. We had a lot of fun, saw a tour of BioWare Austin headquarters, met some other awesome people and Jodi and Patrick came up with one brilliant idea!

On the last day of Guild Summit, we said our goodbyes and promised to stay in touch and I was super excited about this idea they had for a new site dedicated to customized user interfaces. We had all just seen the preview of SWTOR update 1.2 and the new UI and we knew that there would be a great need for a site like this. Jodi and Patrick stepped up to the plate and began creating that site on day one.

I sat down to talk with them now that the site is complete and functional to find out more about the site, the idea and the team behind it. Here’s our interview:

Patrick:    ChewUI.com (pronounced as Chewy) is a database dedicated to customized user interface designs. Player can go to ChewUI and either upload one they have created or search for one based off several different parameters including role, class, and searchable tags. These UI designs are ranked by the users  and a way to make sure that we provide the best UI designs available. We also have forums for discussions related to UI design as well as other topics.

How was the idea formed? Who came up with it?

Jodi: I am the guild leader of the Black Bisectors on the Twin Spears server and I was invited to attend the Guild Summit, Patrick my co-gm was also able to attend and on the last day we were there, we had the discussion panel on the new UI features. During that panel, David Bass mentioned that it would be cool to have a database where players could find great UI designs. Patrick and I looked at each other and were immediately both on the same page. At that moment, ChewUI.com was born. Since then we have worked hard to get the site up and running smoothly. It took a little longer than we had hoped for but we wanted to make sure it was done right. We have a long way to go still and many ideas floating around but are happy with where we are now.

Tell me about the team behind ChewUI

Patrick is the technical genius behind the mechanics of the site as a whole. He lives in North Carolina and is currently finishing his BS in Industrial Technology. He currently works locally in the IT field. Patrick looks forward to beginning his Masters and finding a job that he can truly be passionate about.

Jodi is responsible for the design and public relations behind the site. If you get an email from us, it normally comes from her. She lives in North Carolina and is currently finishing her BS in Information Technology Management. She works doing tech support for a company based in Austin, Tx

How long have you been playing SWTOR? Why did you decide to play it? What do you like about?

Patrick: I have been playing since before release and was able to be part of the early beta tests. I decided to play because I am a SW fanatic and enjoy playing video games. I have played video games since I was a little kid but SWTOR is the first MMO in a long time I have been excited about. what do I like about it? Besides the Dirty kick?  I love the different mechanics that SWTOR. has over other MMOs and that the company clearly cares about their players and takes their ideas into consideration.

Jodi: I have been a Guild Wars player for years but when I heard there was a SW MMO, I was sold. I got to play on the 11-11-11 beta and have been playing non-stop since release. I love the fact that even though the game is huge, your server can feel close and personal. We are lucky in the fact that our Republic guilds on our server are really close and work together alot. There is a core group of about 100 of us on the Republic side that always seem to be doing something together.

What are currently the most popular UIs? Why do you think that is?

Patrick: The top one we have right now is Accomp_DPS, which was designed for use with the Razer Naga mouse, its clean and simple, but you can see everything you need. Another top one is Hiikari, this UI features a very centered design which makes viewing information easy, because it’s all in the same place. Triple Screen of Doom is one I am sure everyone wishes they had a reason to use! Its designed specifically for a player with 3 screens and I must say, if I had 3 screens, this is exactly how I would set mine up.
I think the reason these are popular is because they are simplistic, there are a lot of boxes in the UI and making them viewable without taking over your playing field can be difficult, Accomp_DPS is one that does a really good job of mixing functionality with simplicity.

How do you feel this site is beneficial to players?

Jodi: ChewUI.com was created for the players, we believe that depending on your needs, multiple UI’s may be needed. For example, I have one for PVP, PVP, and Ops. Each is different due to the different needs I have. Different classes and roles also need seperate UI’s. If you switch between DPS and Healing, that affects things such as the size of Ops frames. We wanted to make a site where a player could come and find a UI that would fit a specific role. SWTOR has made it easy to load between UIs so being able to find very specific layouts is important. We also work hard to listen to the player on what we can do to make ChewUI better.

Tell me about your upcoming contest? Will there be more contests like this in the future?

Jodi: we are also doing a contest in the month of May! Starting May 1st, all votes towards UI’s will be counted and at the end of the month, the UI with the highest rating will win a 60 day time card for SWTOR. In the event of a rating tie, whichever UI has the most votes wins.

Players can also earn an additional 5 star vote by following us on Twitter at @ChewUI_SWTOR or liking us on Facebook at http://www.facebook.com/Chewuicom. They then need to send us a direct message with what UI that they want the additional vote added to. Based on the popularity of the contest, we might make this a monthly contest. We are hoping to get the word spread to as many players as possible so invite your friends and guildmates to vote for your UIs or upload some of their own.

But that’s not all because Patrick also gave me a sneak peek into what’s coming soon to ChewUI.com:

At the end of the contest in May we will be launching Search Jawa. We don’t want to reveal all the details now, but we will say that it will be an immersive search experience that will help you find your perfect UI.

If you haven’t checked it out for yourself yet, head on over to ChewUI.com and search their UIs or upload your own. Get in now for your chance to win free SWTOR play time. 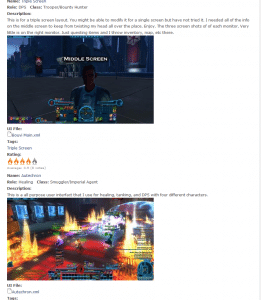