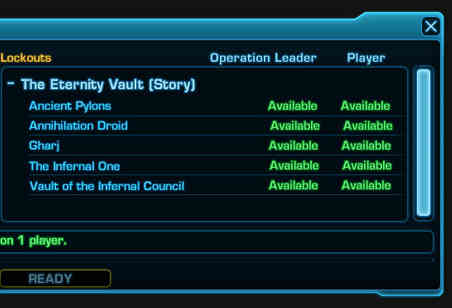 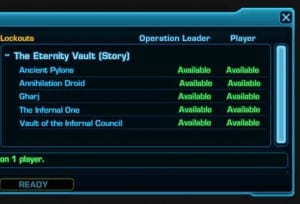 Patch 1.3 is definitely going to be one of the most influential game updates to SWTOR and any MMORPG free update. It packs a big punch with loads of new features that players have been waiting on for a very long time.

Here are some of the main features coming with Game Update 1.3 and what you need to know about each.

The long awaited group finder is finally coming. Some players have even stated previously that the lack of a group finder was a deal breaker for the end-game. It made it too difficult to find other players to do a Flashpoint or Operation with. You could spend hours (literally) sitting around spamming chat channels and begging someone to join a group with you. Then if you do get a group, there is no guarantee that any one in it really knows what they are doing. It’s a real pain and we’re SO thankful that BioWare is finally going to fix this.

But there are some things you need to know about the group finder.

First, it will allow you to queue up for flashpoints (both normal and hard modes), story mode operations, and planet wide questing within your level range.

However, there is no cross-server functionality and BioWare staff have expressed more than once that they have no intentions of adding this as they feel it promotes trolls. There is also the issue of gear and specs. You may end up in a group for someone who is not properly geared or specced for the role they signed up to play. Unfortunately, there is not a lot you can do about this.

Your companions will also get perks.

The next important change coming to patch 1.3 is augment slots to the crafting skills. The crew skills that are able to craft augments can now craft these nifty augmentation kits. Augmentation Kits can be crafted by Armstech, Armormech and Synthweaving. Recipes are found at your trainers.

Augmentation Kits and slots are categorized by item level tiers:

The costs of adding an augmentation slot to an item are:

What is your favorite addition coming soon with patch 1.3?