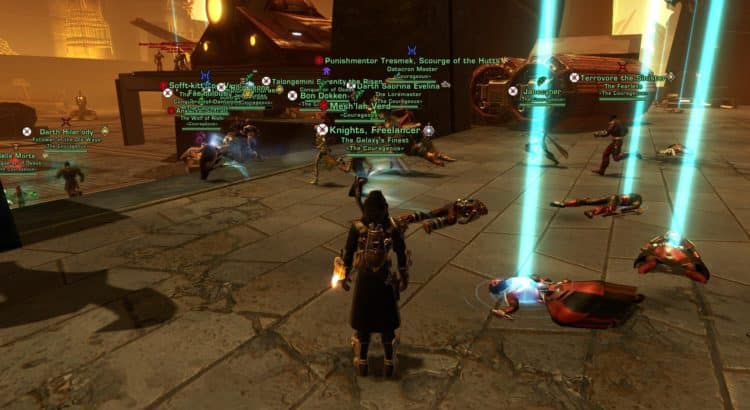 BioWare were not able to get the newest PTS patch with the acquisition changes in this week, but they are targeting early next week.

In the meantime, Eric Musco took some time to talk us through what is coming in this round of changes as quite a bit is changing. Check it out:

Targeting Gear
We talked about this in the last post but just to reiterate: we hear your concerns about gear dropping too randomly and so we are introducing mechanisms to work towards exactly what you want (with one change from last post). Here is what is available in this patch:

Here are the details on the Corellia and Dxun drops:

Corellia – These items will be bonus drops (in addition to personal loot) from killing any boss in the Flashpoint. Drop chance increases based on difficulty.

Dxun – These items will be bonus drops (in addition to personal loot) from killing specific bosses in the Operation. Drop chance increases based on difficulty. The following sets drop from Dxun bosses:

Moddable Gear
We have definitely heard concerns about the lack of mods and moddable gear as you progress through the vertical progression in Onslaught. There is one thing I want to reiterate as you consider your feedback for loot acquisition. It is our goal that your vertical progression will happen very quickly and consistently. We expect you are going to replace gear pieces very often until you hit 306, let us know if that is not the case.

We know many of you use modded armor pieces (often with augments) and so will have a desire to move mods around through your gear. This is especially true for weapons since they are currently not in appearance designer. Here are the changes we are making:

If you want to target specific item drops, this list covers what items drop from what content types. Reminder, this is not fully implemented onto PTS.

To start, just a reminder… the vast majority of loot you will get is personal loot. Personal loot can include any item in the game (barring the crafted and Onderon sets and tacticals) so you do not have to run the content listed below to get that drop. This allows you to gear up entirely by playing whatever you want. Also as mentioned above, most sets and tacticals can be purchased directly.

Everything listed below are bonus loot drops in addition to your personal drops. Specifics are subject to change; we will publish a final list at launch.

Conquest Crates
Drop in both the personal and Guild crates earned each week from Conquests.
Sets

Operations
Bonus group loot drop, can drop from any boss. Increased drop chance based on difficulty (typically a higher bonus on the last boss).
Sets

Warzones
Bonus drop in addition to your personal loot, rewarded in your crate from completing a Warzone of any kind.
Sets