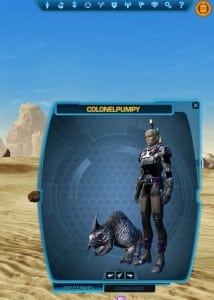 It has happened- the first world kill of the Rakghoul Event. So we know “first kill” claim on a world boss is pretty funny but it’s still an interesting story. They said they were not looking for the boss, but happened upon it while out and about doing something else. The world boss on Tattoine was taken down by a four man group, according to basedlando, who had this to say:

We’ve killed it twice, both times the pet drops. We will be killing it more times, just to make sure the pet is guaranteed, or to see if we just had good RNG to get the pet drop both times. We aren’t posting where on the map the boss is, not to be dicks, but just because it was honestly fun for the four of us to explore the map and kill it first. We also have videos of the kills. If nobody uploads kill videos by this afternoon, we will. There are a few mechanics, but nothing major, and the damage that he deals out is negligible. Everyone go out and get the kills, it’s a blast 🙂

PS- The World First part is mainly a joke, but we think we killed it first. Zorz/EDE has killed it, which is so funny to me, that NiM raid guilds would go get a World Boss kill for a Rakghoul event. 😛

update: the drop is guaranteed, we have killed it 5 times and it drops every time. Respawn timer is 20 minutes.”

So there you have it. If you have not already, you might want to head out and look for him yourself.

There is a brief guide by Dulfy here on the boss. Location mentioned is where it was on Alderaan: http://dulfy.net/2014/01/21/swtor-thorn-rakghoul-resurgence-event-guide/#Rare_Spawns