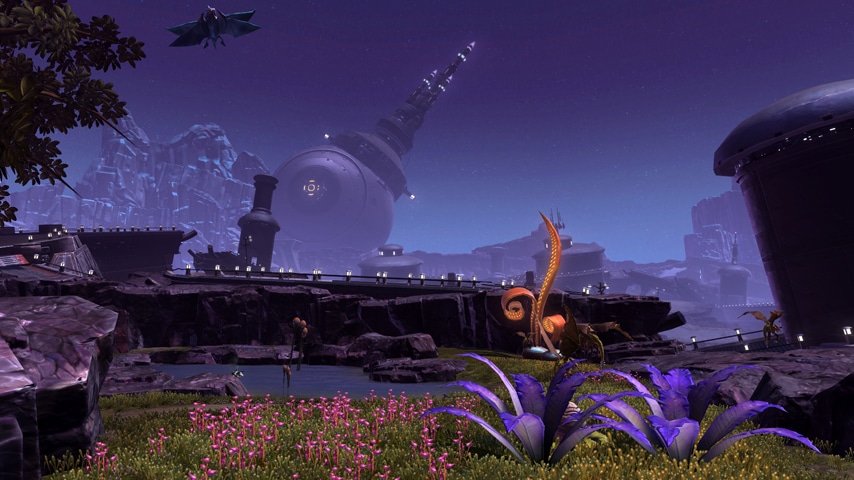 Game Update 1.5 brings us a new area on Belsavis , Section X, along with daily repeatable missions for both sides- Imperial and Republic, as well as two new Heroics. You will get more rewards from these new missions than previous daily areas and they are well worth the time. You will also gain more Daily Commendations and more Credits from completing them all than previous dailies.

So now that you know it benefits you to join the fight in Section X, let’s explore how to do these dailies.

Here is a complete walkthrough for the Imperial Section X Dailies

First, the weekly is easy to understand because it works the same way as the weeklies in any of the other zones. You need to complete every Daily, including the Heroics at least one time in order to get the weekly achievement. This will give you 6 Blackhole commendations, 5 daily commendations and 14k credits when total completed.

To do this quest, you need to collect biological samples from creatures in the area who have mutated. You can kill them or look for their piles of poo and infected eggs in order to obtain these bio samples.

[DAILY] March of the Dread Guard

For this quest, you must rescue some captured Trandoshian held at a prison facility by the Dread Guard. You need to loot a shackle remote from the Dread Guards in the area and then you need to look for the holding areas (with fencing) where you will find the prisoners. You need to free 12 of the regular prisoners and 3 leaders to get the quest completed.

In this daily quest, you need to sneak into the enemy headquarters and learn what you can about them so they can be shut down. You find the tubes all throughout the base but for easy-access, look for the ones guarded by regular-strength troops. Scan four of them to get your mission updated and take out their energy source. Internet with the control panel on the nearby pylons to complete the quest by destroying them.

In this daily, you need to infiltrate the Republic facility and stop their research on activating an old Rakata war droid. Once you get inside, you have to gather one targeting beacon and 3 air strike codes. You get the beacon from Jedi Protectors and the codes from Marksmen.

Once you have the items, you move through to the next zone where you find the War Droid with a protector shield surrounding it. Use the terminals to drop the shield and then place the Targeting Beacon on the droid. Open the roof and head up, prepared to fight. The droid will come after you and you must kill it to complete the quest.

Rewards: 3 Daily Commendations & 4,300 credits
Bonus:
Stage #1- Defeat 26 Republic Forces
Stage #2- Destroy 3 Research Stations throughout the base.
Stage #3- Take out the generator in the main room within the first area of the base to being the Commander. Beat him and take the schematics to complete the bonus quest. Turn in to receive 13k credits and 3 Daily Commendations.

This is a true 4-man heroic so you’re going to need some help on this one. All members of the party must me live players, rather than companions. You must infiltrate the Dread Master Base and destroy the Aurora Cannon before it is operational. You will fight your way through some pretty tough enemies. Fight your way through until you come to some barriers that you will need to disable to get through. With teamwork, you should be able to disable the shield door, then the floor lasers, then the control panels, which require two players working together.

Then at the end you will find the Legion Commander. Be sure to interrupt his Force Siphon ability and he will be easier to beat. At around ¼ health, he also does a Consume Life Force spell that you need to interrupt or he will drain life from someone in your party.

When he is dead, you can then do the final objective but it’s also going to take some teamwork. One of you will have to channel the central control panel and two of you need to disable the generators on either side. Then, the last player of your group needs to access the core and plant the bomb to complete the mission.

This is an area +2 quest but some classes might be able to do it solo. You get this quest when you enter the Frozen Lake, west of Section X. Be careful- this is an elite area. For this quest, you need to kill 18 wild beasts and collect five Flight recorders. After you’re done with this, you need to collect the Master Black Box in the south. When you activate the box, it will spawn an elite Frenzied Bogwing Mother. Defeat her and collect the flight data from her corpse to complete the quest.