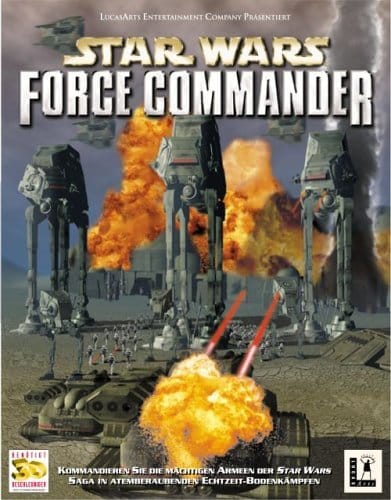 Force Commander is LucasArts second attempt at creating a Star Wars based strategy game for the PC, their first attempt was Rebellion.

In Force Commander you play as Brenn Tantor a young Imperial field commander. The game starts with 3 training missions followed by a further ten mission for the Imperials. You then see the light and in the next thirteen missions you play for the Rebels.

The training missions take you through the basics of the game system, and this is very important since they are quite hard to get to grips with. You need to learn how to work the BHCI (Battlefield Holographic Control Interface), this consists of the control panel at the bottom of the screen and the view of the battlefield above it. The view is in full 3D and you can see the units making their way across the terrain.

The 3D view is one of the games bigger problems. You have complete control over the camera angle and position, and you need to move the camera around so that you can see the battlefield and control your units. Unfortunately it is not at all intuitive and is very difficult to learn how to operate it efficiently and you never feel that it is totally 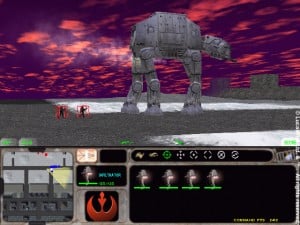 under your control. You have to decide between a close up view of your troops which means you only end up seeing a small section of the game area or you can zoom all the way out and see the big picture. However when zoomed out the troops become too indistinct and controlling them is a bit of a nightmare. Also the terrain often blocks your view when you zoom it and you spend too much of your time moving the camera rather than moving your troops.

Most of the units in the game will be very familiar to any Star Wars fan, with AT-AT’s, AT-ST’s and stormtroopers on the Imperial side, and Rebel troopers and some new Rebel vehicles. Their is also aerial include Y-Wings for the Rebels and Tie Fighters and Bombers for the Empire. However the aerial support is quite ineffectual in an attempt to keep the game more ground based. Although the variety of units is good their AI isn’t, the units are often completely incapable of making their own way from one point to another, often getting stuck behind bits of terrain with no ability to make their own way around.

The maps are generally okay throughout the game but are all massively undulating and with gaps that cannot be crossed. This is clearly to require the player to think about strategy, rather than just gathering your troops and marching across the map. However with the bad AI of the troops mentioned above it can be a real challenge to move your troops about. This is made easier by the ability to mark waypoints which help somewhat but it can still be really irritating at times. 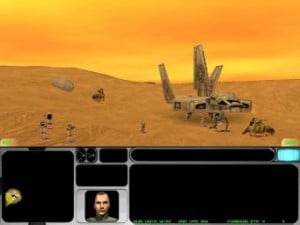 Instead of the usual RTS game style of mining and building units LucasArts have created a command point system. You get more command points by doing well in battle then in turn these can used to buy more units which are flown down by shuttle craft from your command ship. I think this system works fairly well and takes away the need to constantly concern yourself with ‘harvesting’ credits. However the process of ordering your units is not helped by the fact that orders can’t be stacked, i.e. you can only order new units once the current units have been delivered. This is quite annoying and you have to keep one eye on the delivery of the units to make sure that you get all the ones that you need.

Although most of this review has been picking holes in the game this is only because it’s not really as good as it should have been. There is much to enjoy in this game but Overall I can’t keep from feeling slightly disappointed by a game that could have easily been so much better eaven if it’s 15 years old.