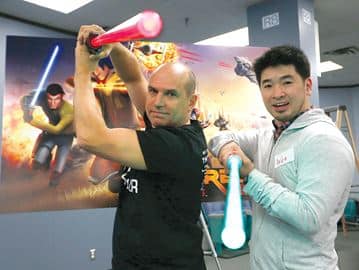 You know how we love to talk about Star Wars games! Well, there is a new one coming from Disney, with the help of Kanata and we’re not sure what to make of it yet. It’s too early to tell but we definitely like

Here are some details:

Star Wars lovers and game creators at Kanata company Gigataur celebrated the launch of the newest Star Wars game on March 27, after working with Disney for 16 months to create it.

The game, based on Disney’s new digitally animated TV show, Star Wars Rebels, is set five years before Luke Skywalker meets Obi-Wan Kenobi, and focuses on rebels opposing the tyranny of the Empire.

Coming out nine months before the anticipated release of the new Star Wars movie, The Force Awakens, the game is meant to “onboard the new generation of Star Wars fans,” said Gigataur CEO Andrew Fisher.

What you might not know is that over the past three years the company has released mobile games for Marvel’s X-Men as well as Mattel’s He-Man franchise.  This has boosted the company’s reputation for working with franchises, making it not such a surprise that they are handling the Star Wars game as well.

This new game hopes to blend both worlds and create something fun for old Star Wars fans as well as new fans that will emerge when the new films are released.

The company hopes to win the approval of both original Star Wars fans and the new generation of movie-goers with the game, which is available for iOS, Android and Windows devices.