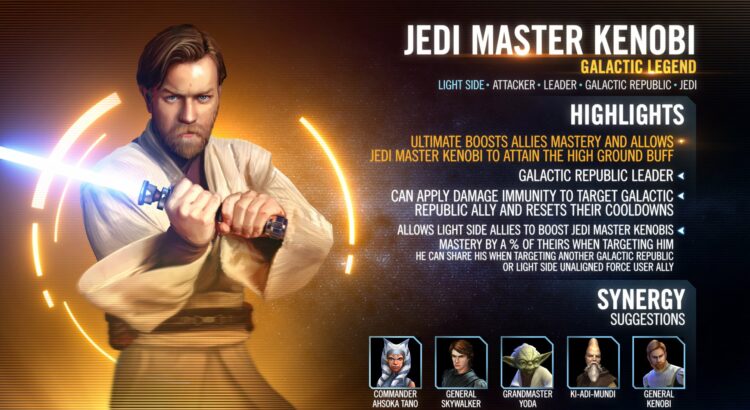 The guys over at Capital Games has posted a new developer insight. This time they are talking with the designers of Echo– the member of the bad batch.   Check i out.

FINAL TEXT: (ZETA) Deal Physical damage to target enemy and, if the target was Dark Side, inflict Ability Block for 1 turn (excludes Galactic Legends). The weakest Light Side ally without Defense Penetration Up gains it for 2 turns. If this ability is used during Jedi Master Kenobi’s turn, he gains 9% Ultimate Charge.

FINAL TEXT: (ZETA) Deal Physical damage to target enemy and inflict Vulnerable and Healing Immunity for 2 turns, which can’t be dispelled or resisted. Call target Light Side ally to assist, dealing 50% more damage. If Jedi Master Kenobi was selected, he is not called to assist and instead gains 12% Ultimate Charge, doubled if he is the Leader, and this ability deals 50% more damage on subsequent uses (stacking, max 10 stacks).

FINAL TEXT: (ZETA) Light Side allies recover 40% Health and Protection and gain Foresight and Tenacity Up for 3 turns. Galactic Republic and Light Side Unaligned Force User allies gain Protection Up (20%) for 2 turns. Target other Galactic Republic ally gains Damage Immunity for 1 turn, which can’t be dispelled, and their cooldowns are reset (excludes granted abilities).

Jedi Master Kenobi gains 1% Ultimate Charge (max 30%) for each buff on all Light Side allies.

Whenever another Light Side ally uses a Basic ability, Jedi Master Kenobi gains 3% Ultimate Charge, doubled if it was during their turn.

Unique 1: MAY THE FORCE BE WITH YOU

This unit has +10% Max Health and Max Protection per Relic Amplifier level, and damage they receive is decreased by 30%.

Brimming with references to iconic Revenge of the Sith moments, Galactic Legend Jedi Master Kenobi has a kit that is as powerful as it is reverent to Episode III. Health and Protection recovery, Defense Penetration, Foresight, and Mastery, along with Speed and Health increases for allies are just the tip of the lightsaber. In addition to Galactic Republic characters, he also acts as a robust leader when paired with Light Side Unaligned Force Users.

When it comes to the opposition, Jedi Master Kenobi inflicts enemies with Vulnerable and calls allies to assist, showcasing the intelligence and camaraderie he regularly displayed during battle.

Worthy of both the Jedi Master and Galactic Legend titles, if you’re not excited for this version of Obi-Wan, “then, you are lost!”