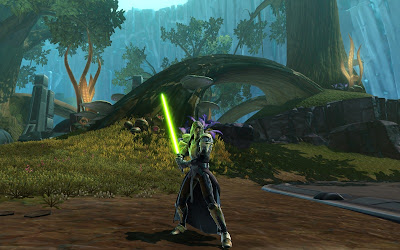 So you’ve made it 50, you completed your story quests(even the ones on Ilum), and you’re sitting around wondering, “What do I do now?”. You’d like to run hard mode flash points or start going on operations, but the people spamming in general chat keep saying something about needing “geared” group mates. How does one go about accomplishing the task of becoming “geared”? Well, you’ve come to the right place. Being a fresh Republic 50 in Star Wars: The Old Republic can be a somewhat frustrating experience if you don’t know what you’re doing. Here are a few simple steps that should help you transition from you under-modded orange gear to some well earned purples.

Dailies:
Daily quest will be your first step in your quest to gear yourself out for end game content. As the name might suggest, daily missions can be repeated once a day. The first set of dailies you will find will be on Ilum, where you ran the “Crystal Ball” quest to kill Darth Arho. That quest in and of itself has already provided you with some daily commendations, the purpose of which I will elaborate on momentarily, but right now we need to get you more. The first set of quests you can find for your daily comms is located in the Republic base just off of the shuttle. In the base will be three new quests you can obtain. One will be a two person heroic called “Darkness on Ilum”. The other 2 will be solo-able by anyone your level. “Darkness on Ilum’ will require the aid of a buddy, but with two people it’s easy enough. Kill a couple elites and you’re good to go. It will also reward you with a purple enhancement modification of your choice.

The next three available daily missions will be located to the north at the Republic Waystation. All three of those mission can be accomplished solo. 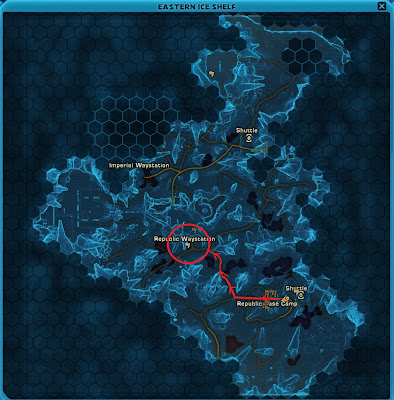 Next we head to Belsavis. Heading into the High security zone, we go south west towards an area you didn’t explore during your leveling process. Down here we will find another taxi point, a bind point, and two more daily commendation missions. 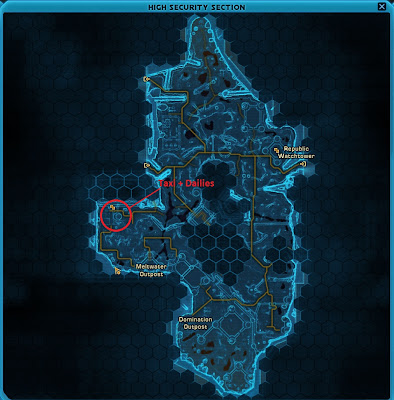 South of that you’ll find another small Republic outpost with no taxi and even more daily missions, one of which will be a two man heroic. “A Lesson Learned” will earn you a purple mod modification for your armor or weapon, but will most likely require a teammate. The second will be a one time quest that will yield either light or dark side points and open up two more daily missions. One will be back up north with the taxi(most likely not until the day after you do the prerequisite mission) and the second will be a four man heroic mission called “Open Communications”. This mission is further up north in the Tomb and will require the use of a teleporter located here: 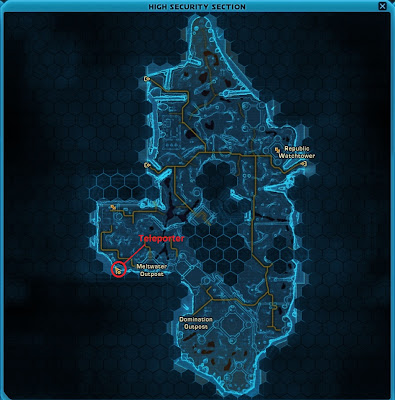 It will also give you a choice of companion weapons as a reward. Sadly, if you have not found its twin up to the north, you will be walking to the next set of heroics your first time around. 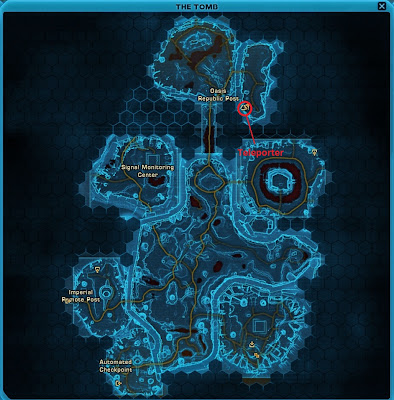 Outside the cave where you start “Open Communications”, you will also find another four man heroic called “The Stasis Chamber”. This quest will yield you a purple armoring modification of your choice. Now that we have located our final two heroics, we can complete those(most likely with the help of three friends) and do the rest of our solo dailies. One will be right outside the cave where the teleporter comes out and three more will be located at the Oasis Republic Outpost. One other will also be available north of the Oasis Outpost near a cave.

Now that you have completed your dailies and earned yourself some commendations, what do you do with them? In the Republic Base on Ilum, and near the taxi point in High Security on Belsavis, there will be merchants called “Mission Support Vendors”. One them will sell modifications(there are two on each planet) and one will sell Rakata implants and ear pieces. Since you will most likely not have enough to buy Rakata gear just yet, I recommend you buy your hilt/barrel and the all the purple armorings you need.

Hard Mode Flash Points:
After you’ve filled, or at least partially filled, your orange gear with purple 50 mods, you can start thinking about hard mode flash points. Hard modes are the same flash points you did while you were leveling up with the difficulty level recalibrated for level 50 players. Note that these will be very difficult your first few times through them and may result in a wipe, probably several. They require the same team set up as they did before, 1 tank, 2 DPS, and 1 healer. Contrary to what one might think, the more difficult flash points are not the latest ones. Esseles is surprisingly difficult on hard mode, given that it was the first flash point you get a shot at and was intended for people around level 10. The order for hard mode difficulties(that I think) is:

Each flash point not only has its own difficulty, but also drops certain types of gear. Each boss from each flashpoint drops gear for one, and only one, item slot. That particular item can be for any specialization of any class, but can only fill that specific item slot on your character sheet.

When it comes to end game gear, everything is divided into three tiers, with tier 1 being the lowest and tier 3 the highest. Tier 1 gear is either Tionese or Energized gear and drops as a specific piece for a specific class with specific stats. Tier 2 gear is known as Columi gear and drops in tokens for a specific class and slot, but not spec. These tokens must be redeemed on the fleet in the Supply area. Tier 3 gear is called Rakata and drops in tokens as well, like Columi. Note that Rakata gear can only be obtained from Hard/Nightmare Operations.

Now that you have some tier 1 and tier 2 gear(Tionese/Columi), you can start doing normal mode operations with the rest of the big kids. Hopefully by then you’ll have a more firm grasp on the gear system and how you apply it to your class. Thanks for reading and stay tuned for the next installment in the Guardian Angel column next week!