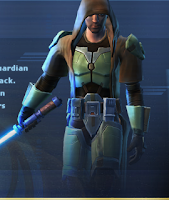 Hello, fellow Star Wars fans. My name is Kiran and I will be writing a new column for the Jedi Guardian class, which is my favorite class in SW:TOR.

From the very first moment I saw the trailer for Star Wars: The Old Republic back in 2008, I was obsessed with the Jedi Guardian. The man on the screen was named Ven Zallow, and even though he was defeated, he resembled the kind of Jedi I always dreamed of being. I was all but ecstatic when I was chosen to participate in the beta. Since then I have dedicated countless hours of research and tinkering to playing and maximizing the Jedi Guardian class. Even though I started with my heart set on a Vigilance DPS build, I fell in love with the Defense tank Guardian, which is build I will be covering in this blog. Here are just a few things I’ve learned that might come in handy to players new to the Guardian. Later on we will cover the finer details for end game tank Guardians, like stat priorities, boss tactics, and rotations.

Leveling Up:
The Jedi Guardian, and the Jedi Knight class in general, is one of the harder classes to level up as in SW:TOR. There are several reasons for this. First off, we are a melee class. Melee classes must be in the thick of the fight in order to apply their damage, which leaves them the most vulnerable. We also lack any form of long term crowd control. At later levels you’ll get “Awe”, which is a short term area stun, but before that you’re really forced to fight everything in your encounters all at once. Because of this you must juggle threat between yourself and your companion in order to ensure you have enough of an HP buffer to survive the fight. I often send my companion in first to act as a meat shield, then taunt the mob off before my companion is slain to avoid losing DPS. Lastly, at lower levels, focus generation is quite lacking. This is especially true in your boss and story line encounters where you are forced to initiate battle from point blank range, where you can not open with your force leap. Once you get “Combat Focus” at level 22 this becomes less of an issue, but any attacks or talents chained to force leap(i.e. Opportune Strike/Momentum) are still going to be off limits. 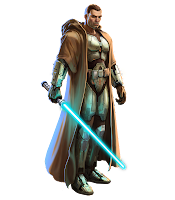 When I leveled up my first Jedi Guardian, the first thing I noticed was that choosing the Defense tree right off the bat exacerbates all of the problems I just cited previously. Soresu takes one focus off of your main two focus building attacks, Strike and Sundering Strike. One focus can be recovered via “Victory Rush”, but that still leaves Strike giving you one solitary point. Because most of your better Defense abilities are high in the tree, I recommend leveling as another specialization. I chose the Focus tree. Why Focus? First off, Shii-Cho still provides some flat damage mitigation, unlike Shien. This helps allow you to tank, even as a DPS spec. Shien, from Vigilance, helps alleviate your focus problems, but the Focus tree matures earlier. You get “Zealous Leap” at level 20 where you don’t get “Overhead Slash” until at least level 30.

You get cool down reduction on all of your force attacks with “Zephyr” and the extra critical chance to Slash makes spamming that god awful attack somewhat worth while. It is also more than possible to tank in Focus, but you should itemize your gear accordingly. Building glass canon is not going to make tanking very reliable. Secondary stats not withstanding, it is important to stack as much health as you can. Endurance should be your primary tanking statistic at lower levels. With your Zealous Leap and high damage Force Sweeps, holding threat, even over multiple targets, should be a breeze. This was my talent tree up until level 33.

Around this level or so is when I finally respec to Defense. With 24 talent points at your disposal, you can finally pick up skills like “Stasis Mastery”, “Hilt Strike”, and “Blade Barrier”. Finally, we have access to real tank abilities. From this level out you should build only in your Defense tree until you reach “Guardian Slash”. My talent tree at level 40 looked something like this.

Talent Builds:
At end game, there is a lot of debate on the swtor.com forums about which talent builds are the best for tanking. The talent tree I have been using since beta is a pure Defense spec, 31/8/2.

This is an all around build good for both PvP and PvE. I choose it for many reasons. It contains all of the core Defense tree talents, “Hilt Strike”, “Warding Call”, “Stasis Mastery”, and “Guardian Slash”, while at the same time forgoing other talents that are worthless in PvP, which I will go into later. I’ve also used 33/8/0 for pure PvE.

Alternative talent builds include hybridizing the Defense and Vigilance lines such as 14/27/0 or 18/23/0.

The logic behind these talent builds is that “Overhead Slash” can have its cool down lowered to 9 seconds, where as “Guardian Slash” has a set cool down of 15 seconds. The Vigilance tree also has some tank friendly talents, like “Protector” and “Commanding Awe”. The reason I choose not to use these builds is because they lack any form of no-channel stuns, where the Defense line has 3 of them. Though stuns do not work on bosses and some champions, they do work quite well on strong mobs, which are often seen during boss fights as adds. Some of these strong mobs, designated as silver stars, are extremely dangerous, such as the infected mercenaries and screamers in Kaon Under Siege. Even so, I have seen hybrid builds used quite effectively. 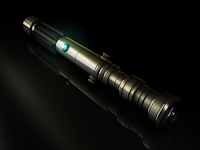 PvE vs. PvP:
When it comes to tanking, there is a world of difference between the PvE and PvP environments. This is because of two reasons. For one, tanks built entirely around defensive stats do very little damage. This effectively makes you a meat shield for your group. You can help keep someone alive, but your contribution to the fight beyond anti-DPS and interrupting is very small. Secondly, defensive stats in PvP are almost entirely ineffective. This is because abilities that are considered “special attacks” have 100% base accuracy, meaning any accuracy bonus goes into lowering your defensive bonuses, and because abilities that are considered “tech” or “force” attacks ignore your defenses entirely. Unfortunately, force, tech, and special attacks will make up 90% of the damage you’ll see in PvP. This makes stats like shield, absorb, and defense more or less worthless. As such, PvP tanks should always choose damage gear from their PvP vendors and avoid talents like “Shield Specialization” that only add to stats we don’t want(I keep “Guard Stance” in just because I do want SOME defense and there isn’t much else to get at that tier). Instead, you should choose talents that lower your crowd control cool downs, like “Command”, and increase your damage, like “Perseverance” and “Pacification”.

When it comes to PvE, however, the name of the game is threat and survival. Since almost every mob spams some sort of high damage auto-attack, your defensive stats are in full swing. Talents like “Command” won’t help you as much, save for some area encounters with Challenging Call, due to the limited usefulness of “Force Push” in PvE. Now talents like “Guard Stance”, “Shield Specialization”, and “Blade Barricade” come more into play.