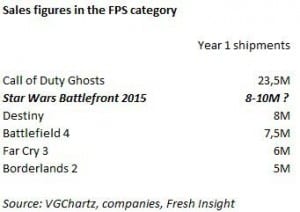 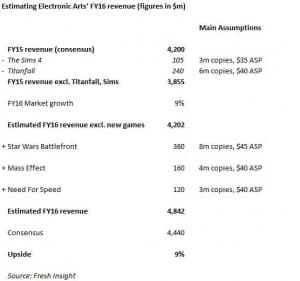 The upcoming first person shooter Star Wars: Battlefront is predicted to be a huge seller for EA Games and the Star Wars franchise. With the release of Star Wars Episode VII during the New Year, it should help raise the popularity of the new game even more.

Taking a look back to 2005 when the first Battlefront game was released it was a hit amongst many and rated 6th in overall sales, according to NPD. The new Battlefront game should be much better in comparison to the 2005 version with the new updated technology we have now. It will most likely be appealing to casual gamers and hardcore gamers alike, making the number of potential sales to rise even more. It could surpass the sale of other major first person shooters, such as Battlefield 4 and Destiny, which will release this year.

Seeking Alpha has some insight on how they believe the game is going affect EA’s Earnings. Check it out:

The previous Star Wars Battlefront was a hit back in 2005 as it was placed sixth in overall sales for 2005, according to NPD. Thanks to the buzz around the Star Wars Episode VII movie and its likely appeal to both hardcore and casual gamers, the new Battlefront will probably perform even better. I would not be surprised to see the game exceed sales numbers of most shooters (notably Destiny and Battlefield 4). Consequently, I have raised my forecasts for the game and now expect 8M shipments in FY16 (and potentially 10-15M copies over its lifetime) and a $45 ASP or $360m revenue.