Now that patch 1.2 is out, we can start adjusting our Guardian Tank game play accordingly. This patch did not have a ton as far as Defense Guardians go, but it changed enough for us to re-examine a few elements in the Guardian’s build. 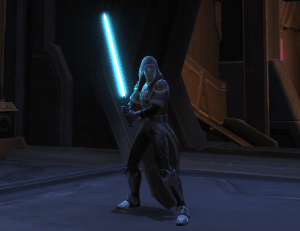 Guardian slash was the ability affected the most by this recent patch. Command took a nerf, which now makes it a worthless talent in PvE, and the tree as a whole got slimmed down. It now takes less skill points put into the Defense tree to get all of the relevant tank skills. Master Strike also received a buff in both damage and channel-ability. The attack can no longer be interrupted. This makes it more relevant in the Tank Guardian’s priority line, since more damage means more threat. Master Focus also adds to Master Strike damage and Single Saber Mastery now works in Soresu form. These are good changes, because one of the Tank Guardian’s main weaknesses was damage output.

Focuses Defense is a new skill on a 45 second cool down that consumes 4 focus upon usage. Whenever the Guardian takes damage, one point of focus is consumed to heal the Guardian for 3% of his/her maximum health. This can not occur more than once every second and lasts 10 seconds. This ability can be used while stunned or controlled. It should also be noted that Focused Defense reduces threat by a moderate amount when used and by a smaller amount every time the Guardian is healed. This can still be useful for tanking, but a taunt ability must be used immediately after activating Focused Defense in order to ensure that the tank maintains threat. I also recommend following it up with high threat attacks, like Hilt Strike and Guardian Slash. Because Focused Defense consumes a large amount of focus, it is also advisable to pair it up with Combat Focus in order to ensure that you have enough focus to both heal yourself and continue attacking.

Now that we have reduced the number of talent points required to spend in Defense, we can refine our original tank spec. The new specialization build I have been using for 1.2 is 31/7/3. This build takes all of the necessary Defense tree talents, the extra damage bonus from Vigilance, and the extra area of effect damage from the Focus line. The one remaining point was put in Master Strike to further increase its usefulness. Single Saber Mastery gives the Tank Guardian a flat damage increase, since most of our attacks are melee. Because Swelling Winds now also affects Cyclone Slash, combined with the additional damage from Single Saber Mastery, Cyclone Slash now hits harder than it ever did before. Note that the overall damage from Force Sweep has been decreased, however.

Single target priority is the only priority list that had any real changes. The current line up is:

With the buff to Guardian Slash’s threat generation, it is still the most important attack on our priority list. Hilt strike is only the second best threat generator because of its cool down, and Blade Storm now hits harder than Force Sweep for single targets. Master Strike is now extremely useful for when you’re waiting on the GCD for another Sundering Strike and to help hold single target threat. Sweep, Stasis, and Slash are all lowest on the priority list for bosses.

Now that Cyclone Slash is a tad more damaging, it becomes more relevant to our AoE priorities. Force Sweep is still our hardest hitting area attack, even though it no longer out damages Blade Storm for single target damage. Hilt Strike still precedes Guardian Slash due to the stun component, but now that Guardian Slash deals additional threat, it is on equal footing with Stasis. Master Strike’s channel makes it unideal for area encounters and slash is always our last filler.

Sadly, even with the addition of patch 1.2, our Rakata gear stats remain the same as it was from patch 1.1. This means that we are still replacing some of our Rakata enhancements with our Columi ones to retain the shield and defense bonuses that would normally be replaced by surge or accuracy. The set bonuses also do not transfer from our Rakata gear to orange gear, which is what we were lead to believe before the patch. Only Black Hole and Campaign gear retain their set bonuses when the armoring mod is transferred. Because of this, it is only useful to replace one piece of set armor with orange, augmented gear in order to add an augment slot to our set. I chose to replace my chest piece and added an absorb augment. Lightsabers, however, can be replaced quite easily with the addition of new, cheap, orange schematics. 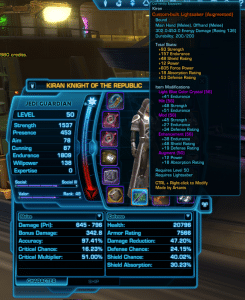 Campaign relics can now also be purchased from the mission support vendors on Ilum, Belsavis, and Corellia for 200 daily commendations. There is a very tasty tank relic there for those who have been saving up their dailies.

Now that we can augment our gear, it’s time to re-bring up the idea of stat caps. As you may recall, we had a graph that shows the falloff curve for all secondary stats in SWTOR: 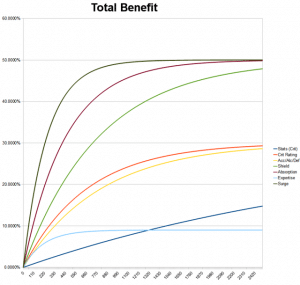 This graph has not changed much with 1.2, except for expertise, which is a stat we are not really interested in. Since Defense is still going to be our favorite avoidance stat, you should work on increasing it until it is roughly in the 450 to 470 range with your augments. This should put your defense chance at roughly 25%. Because I stack defense the highest, I still use a relic with a shield/absorb use ability. Since defense is needed in order to trigger our riposte, which adds even more defense, defense will be the stat the lowers incoming damage the most. Note that augments that add defensive secondary stats also add power, so if you’re lacking on HP you may consider strength or straight endurance augments.

With our shield talents, your shield chance should already be fairly high. It should sit in the 300 range, but defense should still take priority. This will put your shield chance at something close to 40%. The new tank relic procs off of our shield stat and adds more to our absorb. You can use this as an excuse to gimp your absorb stat a little. After all, absorb is worthless without shield in the first place.

In terms of raw HP, it might surprise you to find that the Guardian Tank actually has one of the lowest HP tables out of all the tanks. Why this is, I’m not so sure, but in full Rakata my hit points barely break 21,000 without buffs. I’ve seen multiple Vanguard and Shadow tanks at over 22,500 without the trooper buff, which can only lead me to assume that Bioware deemed hit points a less necessary stat to Jedi Guardians.