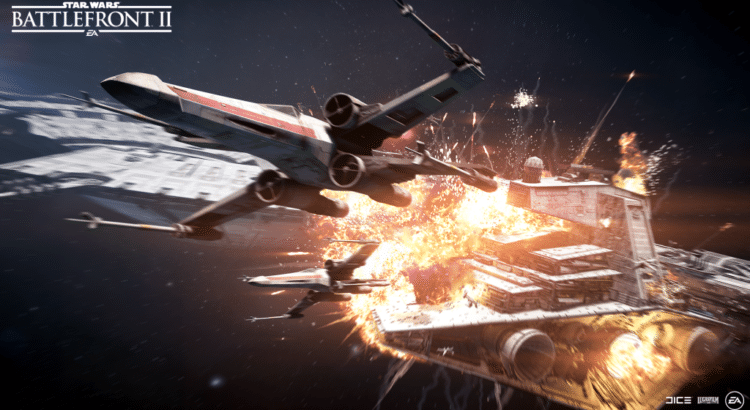 Ten years on from the superb Star Wars: Battlefront II from Pandemic Studios and LucasArts in 2005, and following many rumours about a third edition to the Battlefront series, EA DICE and Electronic Arts released the much-hyped Star Wars: Battlefront in 2015. With stunning graphics and the chance to play as iconic characters and classes from the epic film franchise, people were over the moon with the chance to finally play another triple-A Star Wars game.

Lacking in depth, but coming with a rather grubby DLC line-up, fans had high hopes that the sequel, Star Wars: Battlefront II in 2017 would improve on the first of the reboot games. Sadly, mired in controversy of bad publishing practices, Battlefront II was an utter disappointment. EA DICE have tried to earn back community support with a stream of updates that continue to this day, but instead, much of the community has reverted to continuing to play the 2015 game online instead of the new one.

Gamers are still getting a lot of enjoyment out of the online multiplayer modes of Star Wars: Battlefront, and through customisation rules and eSports tournament lobbies, they are creating the embers of what could be a grand eSports scene.

The Star Wars: Battlefront online community is still very much alive and kicking almost four years on from the game’s initial release. One of the main components which make Battlefront such a loved game online is its Star Cards system, as detailed by Prima Games, deployed through game progress rather than loot crates. By levelling up and earning in-game credits, players can upgrade and custom-build their load-outs with different appearances, weapons, and modifications. This system allows for a set level of balance in the game as those who play and improve get access to better gear as opposed to simply paying to win or getting lucky in a crate.

The online gameplay looks stunning, as though battles were being fought in 4K movies, which will be another factor towards fans coming back for more Battlefront action. As recently as 5 April to 19 April 2019, online tournaments on Star Wars: Battlefront are being hosted on eSport tournament platforms like Toornament, which feature custom rules to the Star Cards that are allowed to be used to bring about more balance to online competitive play.

With a decent game, a lively community, and the chance to customise certain aspects of competitive matches, Battlefront still needs a few more levels of support for it to move into the echelons of being an accepted eSport.

Battlefront needs support from all parties

The first level of support that Star Wars: Battlefront needs to break into the eSports scene is support from its publisher, Electronic Arts. They have been struggling with making their loot box-orientated sports game modes respected by the greater eSports scene, despite their aim to join the big three of eSports, per GamesIndustry. But without any pay-to-win factors and a game that can feature elements such as teams and tactics, if Electronic Arts committed to hosting organised competitions, advertising them, and supplying a decent initial prize pool, the Battlefront eSport could being to emerge.

From there, it’s all about production value, creating interesting games, and accruing an audience. The currency of eSports in viewership numbers as that’s what translates into third-party involvement. As seen with the likes of Counter-Strike: Global Offensive, League of Legends, DOTA 2, and Overwatch, not only do third-parties like Betway further legitimise the scene through offering odds on matches, but they also pump money into the industry through sponsorship, allowing eSports to continue to grow, improve, and grow its audience.

The game needs to be worth investing time in as a player and as a spectator, as explained by EdgeSports, and clearly Battlefront has plenty of appeal to players as it has kept running beyond the release of its sequel. As a game with superb aesthetics and is set in the Star Wars universe, it won’t be difficult for potential spectators to see the appeal in watching matches and battles. Here, however, it would go back to the publisher and developers to make compelling game modes look that much more exciting through how they’re shown to the audience.

ICYMI: Battlefront does right by Star Wars. Our review in progress: https://t.co/Czg3VKhuy1 pic.twitter.com/h1XJJ4drsD

While ever coming close to the popularity of the likes of DOTA 2, League of Legends, and Counter-Strike: Global Offensive seems unlikely, with the right initial backing and production, Star Wars: Battlefront would certainly have a chance of emerging as a legitimate eSport on the professional scene.

Despite the franchise’s bad press, the Star Wars fan base is still gargantuan. There will be members of that fan base who are already watching other eSports, and if someone was to tell them that a competitive match of two teams of 32 players were about to battle on Hoth for a £100,000 prize, you could bet that a fair few will want to give it a look. From there, it’s up to the features of the game, its presentation to the audience, and the skill of the players to win them over.

The game is built to feel epic, it is fairly well-balanced – and can be made more balanced – and is set in the Star Wars universe. There’s a reason why players are still setting up competitive tournaments online, and if it were to get proper backing, Star Wars: Battlefront could become a bit hit in eSports.