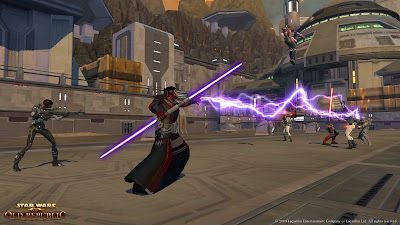 SW:TOR Lead Designer talks about the third element of MMORPGs.

This week’s update from Star Wars: The Old Republic is an article from Principal Lead Systems Designer Damion Schubert, who talks about designing systems for MMORPGs. Community is one of the major elements that is needed to make a successful MMORPG, one that Schubert refers to as the whole ball of wax.

To me, as an MMO designer, community is the whole ball of wax. Let’s face it, if you wanted to play just a ‘game’, you’d be off playing a single player roleplaying game. If you wanted a ‘world’, maybe you’d play a life-simulation game. But community – well, that’s the whole ‘massively multiplayer’ part of MMO. When you look at it this way, ‘community’ is at least as important as ‘game’ or ‘world’ in this debate. 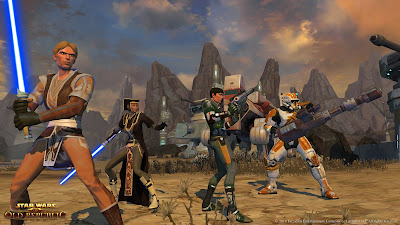 While they have added the opportunity for players to solo their way to the maximum level, they are adding elements to the game to make people want to group, or risk missing out on some great content. But the article also goes into some details that reveals how some systems are being approached in the game such as crafting and how the team wants crafters to be able to make a name for themselves. A statement I last heard during the early development stages of Vanguard: Saga of Heroes. One can only hope that BioWare creates a crafting system as detailed and with any luck much more beneficial and fun as the one in Vanguard.

Crafting is another area where we’ve talked a lot about community. The systems design team is not satisfied with some other crafting systems that we’ve seen, where many players craft almost exclusively for themselves. We’ve spent quite a bit of time discussing how to ensure that crafters – true dedicated crafters – can make a name for themselves and be important in their community. But that is a discussion for a future letter.