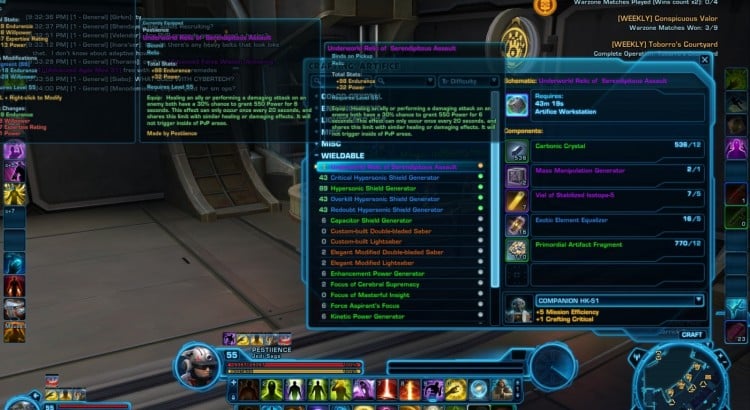 In the final days before KotFE was released, a series of developer posts were published telling us many of the new things we would experience in the game. Of these, we also saw the  Crafting Changes in Fallen Empire developer blog that we previously shared with you. In that, we had an announcement on the Elder Game Crafting along with some basic info about what this would be.

SWTOR Economics has taken this section and broken it down more for additional analysis, given us as much information as really anyone has at that point. Andrew talks about reverse engineering, crafting gear, what impact this gear will have on stats, how new material is acquired and more. It’s a good summary of what we know so far with some speculation on how this will affect the game and economics of SWTOR.

There is a lot of missing information that will need to come to light before this all adds up, but there’s nothing that’s been announced regarding Elder Game Crafting here that’s intrinsically bad.  The initial reaction was negative, but I think that was prior to the realization that the gear was not custom gear that could be min/max’ed for progression raiding.  There was also a lot of negativity regarding the inclusion of Conquest rewards in the crafting process, but I am a huge fan of this decision.  I think Conquest is a great mechanic to create incentives for guilds to run content and remain active every week in the game, so anything that encourages it can only be a positive for the game going forward.

What do you think? Are you excited about Elder Game Crafting? Disappointed? Still waiting to learn more before you can make a proper opinion? Shout out in the comments!