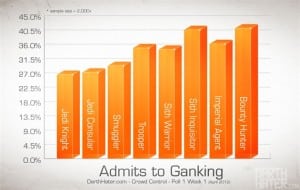 As part of their new recurring column Crowd Control, Darth Hater brings us some interesting statistics on the game and its players. This week is all about player habits as they relate to “ganking” behavior. This is especially interesting to me because I play on a PvP server, where “ganking” is much more likely and common.

We found some other interesting correlations related to ganking as well. City dwellers are 5% more likely to gank than their rural counterparts (36.0% versus 31.1%). Players that choose body type number four — the roly-poly type if you happen to be male — are 6% more likely to gank players that choose the small or medium frames (40.1% versus 34.1%). And finally, players describing themselves as “dog people” are over 10% more likely to gank than others (40.7% versus 30.3%). So, what inferences can we make here? For one thing if you’re walking through a city and see a fat Mandalorian walking his dog…RUN!

We also found that Imperials are 10% more likely to gank Republic players than vice versa. But, the question on all of our minds: Which single factor has the greatest influence on determining a player’s likelihood to gank? Alignment. 45.1% of Dark side players admit to ganking as compared to only 29.1% of Light side players. Grey players come in slightly higher at 33.5%, however they make up a relatively small portion of the population.

Best part of all of this? They have graphs and charts! You know I love my charts and graphs. They begin with an explanation into how their data is gathered so that we know it is legit and valid and then they move on to explain (with visuals) what they have learned from their surveys and the data.

They’ve discovered a lot of interesting trends and it’s well worth giving it a look over. I’m excited for them to continue this column and data collecting on SWTOR.