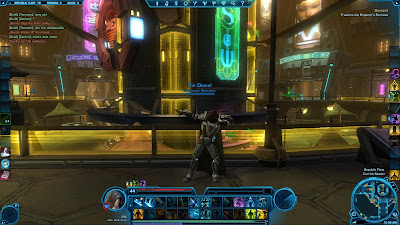 Allison Berryman, Senior Community Coordinator had an interesting update in the official forums about forum changes coming next week. All in all, it looks like the changes will help make the forums easier for everyone involved to use. One of the biggest changes- server forums are being implemented.

In the layout we have now, things like Guild Recruitment and Server Events are spread out and can be difficult to locate. We’ve also seen some requests for places on the forums where players can go to discuss things more closely with others on their particular server, and for a place for suggestions for the game. To start addressing some of these concerns, we will introduce a new forum section: Server Group Forums, and will place the Suggestion Box back in its rightful place under General Discussion.

The Server Group Forums will be divided by server type (PvE, PvP, RP, and RP-PvP), and then alphabetically by the server listing. We have grouped several servers of the same types together to provide areas where players can more easily talk with others on their server (and other players on the same types of servers) – about crafting items, grouping up, hosting events, and more. Each Server Group Forum hosts several servers. If your server’s name falls in the alphabetical range in the forum title, that’s where you’ll post!

Each Server Group Forum has a Guild Recruitment subforum, where players can recruit others into their guilds and look for a guild. There are many more subforums for recruitment in this organization than previously, so it will be much easier to find a guild on your server!

Along with these additions, there will also be some sections of the forums that are closed. Per Allison:
As a side effect of opening these new forums, we will close the Guild Hall and Server Events sections of the forum, as the content for those forums now belongs under our Server Group Forums. We’ll leave those forums visible for a time (but not open for posts) so that you can grab the text of your recruitment posts (or any other posts you’d like to keep from those forums) and post in the new Server Group Forums.

She adds that there will be a suggestion box as well and that they welcome our feedback on what we think of the new forum changes and additions. All in all, BioWare seems pretty open about hearing what the gamers want from SWTOR so I’d say if you have an opinion, don’t be afraid to voice it through the proper channels.

What do you think about the upcoming forum changes?