Today I had the opportunity to have a chat with Vincer, from the old Star Wars galaxies guild “V Squad””. The guild is a friendly, casual guild that supports the galactic Republic. Check out the interview below.


Where did your guilds name come from?
“”V Squad” was named by a member of my Star Wars Galaxies guild. I ran the squad as “Vincer Kaden”, and this person took to just calling me “V” in chat. When we formed up as an official player guild, we took the name but decided to make the “V” stand for “Victory”.

Can you give me a quick 2-3 sentance description of your guild?
V Squad is a friendly, casual guild that supports the Republic and each other. We are organized and respectful, with the primary goal of having fun in Star Wars: The Old Republic. 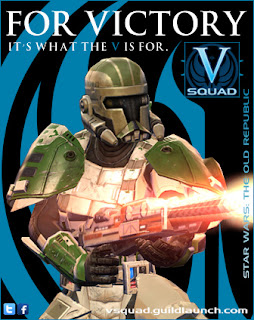 How did your guild come about?
The guild was formed out of the unexpected joy of finding a few others who we explored and hunted with on a nightly basis in Star Wars Galaxies. The founding of the guild was merely a formality, as we were already a tight-knit group. Now, years later, everyone has gone their separate ways. But V Squad is now seeking new blood to rejuvenate itself and rebuild that level of camaraderie and fun.

What kind of play style do you focus on? PvE, PvP, RP:
The guild focuses mostly on PvE, with enough RP to support the engaging and decision-based storyline that SWTOR will provide. PvP remains a possibility depending upon how it is implemented.

What is your guild set up? How do you run your guild?
The guild simulates a small military squad. It is broken into three branches: Ground, Space, and Ordnance. This allows the guild to allow members to establish expertise in the areas they most enjoy, while ensuring that they are still contributing to the guild. Each branch will have a Captain, Lieutenants and troopers. At the top is a Commander who ensures the branches are working together, and a Lieutenant Commander who assists.

This is more for immersion and structure then it is to “boss people around”. It’s still a game, but I found that organizing the squad helps people know what they can focus on and be productive. There’s no requirements to contribute to any of the branches. 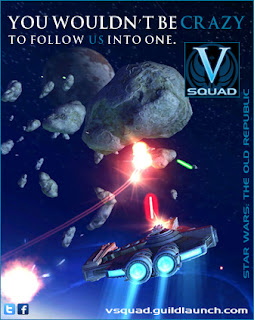 How serious do you play and/or run the guild?
We’re here to have fun. But we take “having fun” seriously. When we have an objective, we use our skills and synergy to achieve it. Beyond that, everyone is expected to be mature, friendly, and helpful. If they prefer to be mostly solo and pop in now and again, that’s fine. Or they can be an active member of the guild, suggesting ideas and affecting policy.

Do you have ranks or a certain hierarchy in your guild?
Absolutely. As mentioned earlier, they are to help simulate a military squad within a Star Wars universe. But such structure is not taken to the extreme where subordinates are required to listen to their higher-ups. Just stick to the rules of being friendly and respectful and we need not worry about the hierarchy.

Why did you choose the Republic / the Sith empire?
The squad has it’s roots fighting against tyranny. We will continue to be deployed into the areas of the galaxy where we can do our best to restore peace.

Why do you run a guild?
I’m a better guild leader then anything else. I’ve enjoyed leading squads, organizing events, and even running player cities in the past. It’s a rewarding job to bring together a group of players from around the globe and form an effective and fun squad.

How do you approach Raid Planning?
Raiding is not a primary focus of V Squad initially. As my own experience leading raids themselves is not there, I am seeking to recruit a capable “Captain” of the Ground Forces branch to organize the troops into a raid-capable unit. This is why V Squad works: delegation to those who have a particular interest tends to lead to tremendous success.

Are you always open for new recruits or do you want to keep a certain guild size?
While I prefer a small to medium guild size, I would never turn away a good recruit. If they match what we’re after, and the guild is the culture they’re seeking, they’ll be accepted.

Guild size?
Small to medium, depending upon our needs, goals, and the whim of the current guild members. 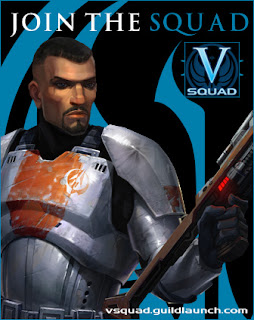 What makes your guild stand out from everyone else? What makes your guild unique?
Organized fun. We present a guild that’s slick and organized, but loose and enjoyable. We do not place requirements upon members beyond what should be common sense in how we treat each other. Members can opt-in on whatever level of immersion they wish within the guild. It’s a game, and we know it. That doesn’t mean we’re not serious about it, but we don’t take anything too seriously.

How do you spend your time until release? Do you know each other in real life or do you spend a lot of time on forums?
I know my Lt. Commander in real life… she’s my wife. The newest recruits have been a joy to meet. We spend a lot of time on our official forums, or look around for more information about the game that we can share with each other.

What Other Games are you currently playing as a guild?
Some of us are also in a LOTRO guild, and also in DC Universe Online. But the focus is now on SWTOR. I spend more time improving our guild side and seeking the right members then I do playing other games. I’d have it no other way.

If somebody is interested now how and where can they apply for membership?
The best place to start is http://vsquad.guildlaunch.com. There is an application located there. I will respond as quickly as I can.

One last question, if there was one thing you could ask the Dev’s to include, what would it be?
Want to join my guild?