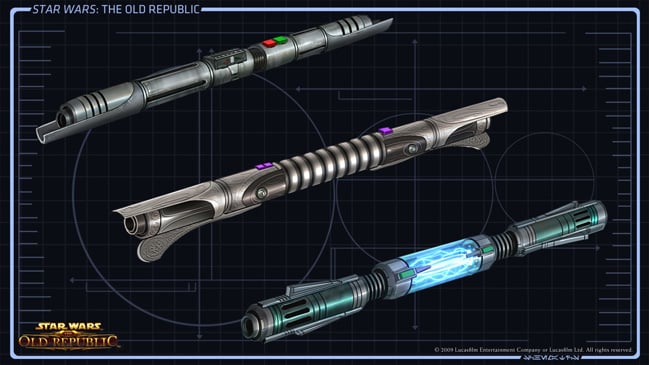 So here’s a fun question for SWTOR players: does your character’s lightsaber have a name? And why or why not? We want to hear your lightsaber names and if you don’t have one, tell us why.

This comes from a fun thread on the SWTOR Community Forums called “What is the Name of Your Character’s Lightsaber?” where players are discussing whether or not lightsabers should be named and what theirs are named.

Halinmonk starts it off: “My Jedi Consular called her first lightsaber “Dawn” and her second “Aero”, my Sith Warrior called her’s “False Friend””.

Tahrl brings in an opinion of those who are opposed naming their sabers:

Hate to be the boring one, but neither my Jedi Knight nor my Sith Warrior named their Lightsaber. It is a weapon, a tool. Like a really deadly spanner. It’s not befitting a name. It may be damaged, discarded, replaced or stolen. Naming it implies an attachment. And that is something neither Jedi nor Sith are big on.

“The lightsaber is not just a tool, not just a weapon. It is part of the Jedi, an extension of their body, a conduit to connecting the Force. It is not a thing to be named. . . it is me, as I am it.”

Someone even mentioned adding an option to the game to allow you to name your lightsaber. I’m not sure BioWare will be jumping to add that to their to-do list but it does sound like a fun novelty idea. They’d probably make us purchase the ability to do so from the Cartel Market.The lightsaber is not just a tool, not just a weapon. It is part of the Jedi, an extension of their body, a conduit to connecting the Force. It is not a thing to be named. . . it is me, as I am it.”

Do what do you think? Should a lightsaber be named? Do you name yours? Do you think it is keeping ith true roleplaying or just something non RPers can do for fun?