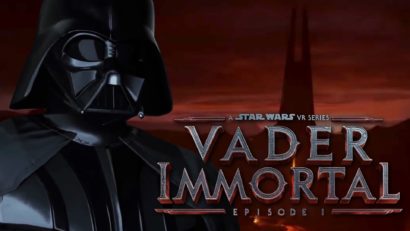 Vader Immortal arrives on Oculus Rift, bringing the VR experience to yet another platform, while lightsabers come to Oculus Home. Here, you get to step inside the shoes of a smuggler and also navigate Darth Vader’s fortress. You get your very own droid companion and there are many story-driven elements for you to explore.

He’s given us over 44 minutes of gameplay footage in this video. And he has this to say:

“This was unimaginable. The gameplay was cool, but the STORY WAS WHAT MADE IT LEGIT. This raises so many theories it’s unbelievable. Who was Vader speaking to? Snoke?”

If you like it, please support his channel. More info on how you can support in the description of the video. I do not have Oculus Rift so I was really excited that he did this video for us.

Oculus has also reviewed it for us and have this to say:

” With writing from David S. Goyer, voice acting by Maya Rudolph, and immersion on a cinematic scale, Vader Immortal: A Star Wars VR Series from ILMxLAB represents an exciting new entry in the Star Wars canon. When Episode I launched alongside Oculus Quest last month, Esquirenoted that “Vader Immortal looks absolutely stunning and has a lightsaber experience good enough to live up to your childhood dreams of being a Jedi Master.” And now, that same experience is available on the Rift Platform—in more ways than one.”

And here’s some video of Lightsabers in Oculus Home:

As of June 20th, everyone on the Rift platform gets a red and a green lightsaber as a free interactive item. How cool is that?

This game looks pretty awesome. Have you tried it yet? Looks like a good reason to purchase Rift-S!