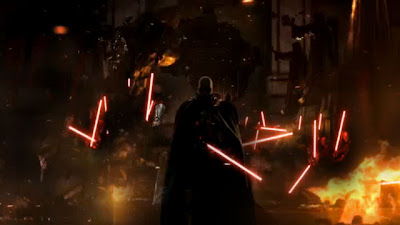 arstechnic has a great interview with Daniel Erickson about who the real bad guys are in Star Wars:

“The one thing you’re never going to hear is ‘make the bad guys less interesting.'”

I’m sitting in an out-of-the-way room of Lucasarts with Daniel Erickson, who keeps swinging back to one topic: why the people we’ve come to hate in the Star Wars universe act as they do. He’s given this some thought; as the lead writer on Star Wars: The Old Republic, the upcoming Star Wars MMO, it’s his job to help tell both sides of the story.

In our time together we discuss the extended universe, he makes the case for Grand Admiral Thrawn, and explains how the Jedi attempted genocide… and why the Sith may just be right.

While we’re on the topic of the extended universe, he brings up the Thrawn trilogy by Timothy Zahn. “Thrawn is a huge inspiration to me. The insight into the people dealing with the heroes,” Erickson says. He puffs out his chest slightly, and changes his voice to speak like Thrawn. “Why are these people resisting order, and regulation. The galaxy was at war—it was a horrid place before. Is it really not enough to have order? You need everything? You’re acting like children!” In other words: who needs freedom when there is order?

Another key note comes from the story of EXar Kun: “If you give brash young people almost god-like powers and ask them to behave… you’re asking for problems. You’re dealing with someone in their early twenties, who has never been able to be thwarted by anything, and you tell them not to play with these Sith artifacts—of course they’re going to think they can handle it.”

Erickson leans forward to make the point. “You’re training children to deal with this power, and then demanding them to be incorruptible, and holding them to a standard that we don’t even ask from any of our own societies. We looked at these issues and said, ‘We could come up with an entire thematic run with this.'”

Why the Jedi were wrong

The most important aspect in telling this story, in the era of the Old Republic, was to dive deeper into the world of the Sith. “”The thing that came up first was deciding how we were going to present the Sith and the Empire. And then really spending the time to make sure we were creating people and a culture, not two-dimensional villains. We had to start from the basics: why are they like this.”

There were hints of what happened between the Jedi and the Sith in the formative years of the Force. While the Force itself always existed, learning how to use it, and how to train others to use it, took time. “”The Force was developed on Tython, discovered by these pre-Jedi philosophers. They came into conflict about what it means and how it should be addressed.” Erickson explains. This conflict split the people in two. “”What the Jedi call the Dark Side, and what came to be known as the Dark Side, these people believed that life should be about emotion. They believed you should be unrestrained, that the galaxy wants us to love and lust and kill and make art and cry and dream…” he trails off. I imagine him sitting on a throne, lightsaber under his right hand. This conversation started as two Star Wars fans chatting about the expanded universe, but now I’m starting to understand the draw of the Sith.

What happened to these hedonistic followers of the Force? “They get chased out of the galaxy. In fact, in the lore, chased to the point where the Jedi believe they are dead. This is very close to genocide! The Jedi believe these people to be unredeemable.”

He points out that we’ve only be presented one side of the story. If you grew up among these people, you have a very different story. “You know there is an Emperor, and that he saved your people’s very existence, and there is a society out there larger than you, who deemed your people and your religion not worthy to exist.”

The story is in good hands

We were given a hands-on with the game, but what Erickson said kept running through my head during GDC. Did he really just convince me that the Sith were the good guys in all this? Growing up, being taught to understand and explore our emotions and passions, and then being told this monk-like order had hunted my people to near extinction… it’s easy to see the attraction to taking up your blaster or lightsaber against their order.

In other words, to give into your hate.

You can read the whole article here