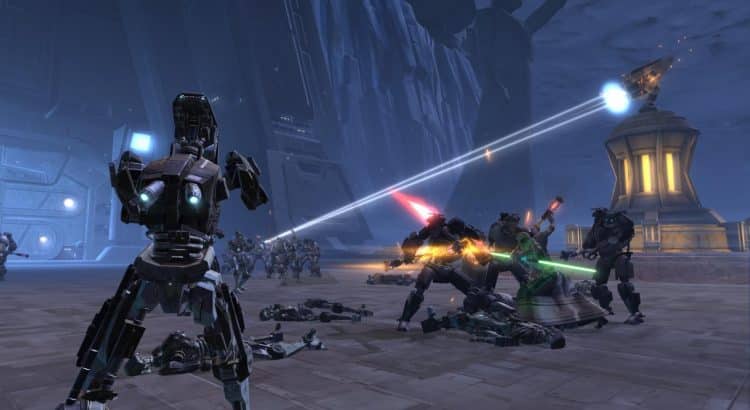 I had my fair share of raid leading in World of Warcraft so by the time SWTOR came out, I was looking for an alternative MMORPG and of course, I loved the Star Wars theme but I wasn’t really looking to raid lead anymore. I know many of my friends were, even friends who had led raids in hardcore guilds in WoW but for me, I wanted a game where I could sit back and relax, soak in the new story and content, and not feel rushed for progression. There’s nothing wrong with raiding or leading, or progression. I was just at a point in my gaming life where I wanted something different. That said, there were and still are, people who love raid leading in SWTOR.

If you’re thinking about becoming one of those people, mirta000 has some advice for you. It’s all compiled here in this video of about 11 minutes and there are transcript notes below. It’s pretty solid advice, really, for any MMORPG, with a few specific hints that relate to SWTOR. So give it a watch/listen/read and enjoy!

Here’s a transcript of the advice within the video:

there are different ways of raid leading. What I say is not absolutely truth. Keep that in mind and let’s begin:

1. When making a raid group, do not go for “we have no raid leader, we’re all leading!” approach. Such approach makes it far harder to put the team back together when fall out happens, tends to lack that person that can enforce order, give advice, or call out mechanics. Sure, you can give those parts of raid leading to different members, but ultimately it will be a rather unstable atmosphere. With nobody enforcing the rules, the rules will always be determined by the majority. So if enough people decide that it’s rude to remind tanks that they should pull in tank stance, that is the new rule of your group, no matter how retarded it is.

2. Do not guild AND raid lead.

3. When starting a static and writing an ad for the static be VERY specific.

5. Think twice about raiding with friends.

6. Prepare for it being very personal when it comes to letting go people. Raiding is never separate from the rest of your MMO life. The way that you interact with these people, or if you interact with them ever again, changes considerably. Upon the fallout of the first raid group that I was in, we all blacklisted each other. Not that we hated each other as people, nor was the interaction outside of raid times very unpleasant, it just that the raiding falling apart did affect us all very strongly and we did not want to have to speak to one another again. My second raid falling apart was even more awkward because people that were in the raid group were my friends, my officers and people that I hung out with daily and still do. The way that I see them and interact with them has changed considerably. Hence my point number 5 – be careful when raiding with friends.

7. Raid atmosphere. There will be a point where your raid group (unless of course you’re the best of the best) will get stuck on a certain boss, or a certain turn, or a certain wing, depending on the game that you’re playing. When you do hit that point, do anything in your power to not allow the general determination of people to slip. After a long time with no progress people become agitated, snappy and even worse come into the raid just prepared to die for hours. When nobody expects a clear anymore the performance falls to such a level that a clear is no longer possible. If you see the danger signs of this happening, pull your group back. Maybe you all need a day of just talking rather than a day of raiding. Perhaps you need to prepare A, B, C and D plans and then try them out the next day. Perhaps it’s time to look into who is performing the worst and catch said player up, instead of banging your head against a wall. Or perhaps it’s time for some content change. Do speeches. Do talks. Do breaks. But DO NOT let your raid hit a point where they’re no longer even trying to clear. In raids people first and foremost have to be focused. If said focus is no longer possible, trying to raid further as is, will not help.

8. If you’re stuck, don’t be afraid to ask for help. Reddit, forums, or any other form of popular communication among those that play the same MMO as you works.

9. Duties of the raid leader:
a) record your raid time, somehow. It helps to have that footage to revisit what went wrong and what can be changed.
b) call out mechanics.
c) don’t be afraid to go and talk to the people holding your raid back. Underperformance does not necessarily lead to throwing them out of the raid. Ask what is happening, what they’re doing, what they’re finding difficult and set time aside to help these people practice.

if you want to be hardcore, or simplify your life a lot, knowing EVERY class in the game really helps. It’s hard to figure out what your team is doing wrong when you don’t know the skills of other classes or what they’re doing. If you did level all the classes and can play all of them well, it will be very easy to see what is going wrong, as opposed to sitting there and comparing your group videos to videos of other groups.