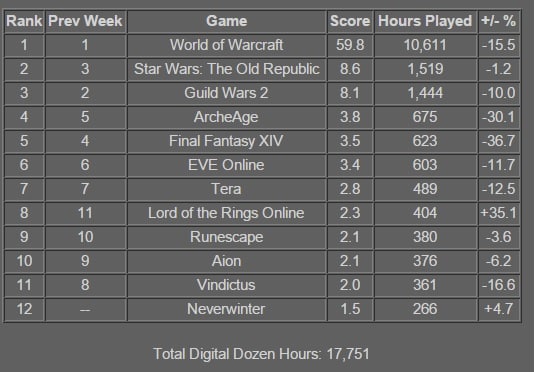 According to the Xfire community Star Wars: The Old Republic did very well on their final ranking for Digital Dozen. The scores were calculated by taking each weeks rank for the game and the games average ranking. If a game was not in the top 12 it did not end up on the list, giving it a score of zero.

SWTOR ranked number 3 on the top 12. Its score in 2013 was 10.1 and rank was 3. The score for 2014 is 9.4 and the number of weeks that it was in the rankings is 52. The score for SWTOR did not drop nearly as much as its rival Guild Wars 2. SWTOR had an amazing strength during the last part of 2014 and took the number 2 spot away from GW2 in the last week of the year, after Bioware included new content, such as Shadow of Revan. However, it did show weakness in the financial area and decreased in revenue.

Here is a Google spreadsheet were you can review the data for the last three years.