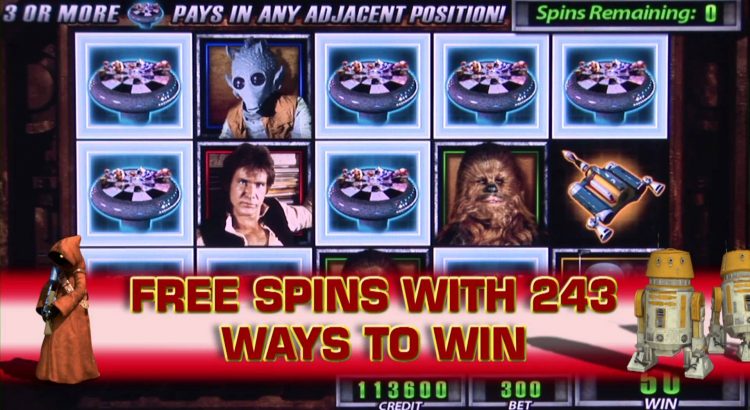 Star Wars is one of the most popular franchises of all time. People from all over the globe love it and are always looking for things that are related to it. Star Wars slot games were popular in Las Vegas and even had people queuing up to play them. Unfortunately, since Disney bought the rights for the franchise back in 2012, these slots have been discontinued and it does not look like they are going to budge on their stance. However, for Star Wars fans, there are two slots that are similar and can help you get your space galaxy fix and we will look at these right now.

This is a 3D slot machine game that was created by Microgaming, one of the best software developers in the world at the moment. This slot was created for those players who love shooting alien invaders in return for cash rewards. To play this slot, you simply have to decide how much you want to bet per spin, it can be between $0.25 and $100, and then click on the spin button. If you want to keep the same bet per spin but do not want to have to keep pushing the spin button, you can simply click the “Autoplay” button. The minimum and maximum bet that you can place means that this is a slot game that is great for those players who do not like taking risks as well as those who love to take a risk every now and then.

If you land five flying saucers on an active payline, you will win 1000x your wager. There are two bonus games and if you land three or more scatters along the reels, you get to choose between Planetary Assault and Space Attack. The former is a pick and choose bonus where you can win some cool prizes (if you select wrongly then the game will be cut short pretty quickly), while the latter will see you earn at least 5 free spins and you have to fight against drones to win extra prizes. Other symbols that you will come across when playing this game include spaceship pilots, laser guns, and space torpedoes. The low paying symbols are the regular card symbols.

What about the graphics for this slot? Well, Microgaming are well known for their amazing graphics, but they will be the first to admit that the graphics are not that amazing for this particular slot. However, it is one of their earlier slot games so we can let them off with that, and it is still a fun slot to play despite the average graphics. This slot comes with an RTP of 95.99%, which in today’s slot world is not that great, but when this slot was released the RTP would have been very respectable.

Fun fac about Drone Wars: according to this Polish guide of online casinos – www.kasynopolskaonline.com,  it’s the favorite slot game of Polish players, you should probably check it out!

This slot is based on the popular TV series and was also developed by Microgaming. Here you will join Starbuck, Apollo, and the rest of the crew as you journey around space looking for some big cash prizes. When it comes to visuals, it has some of the most impressive graphics that you will be able to find at the moment. You do not have a lack of ways to win either as this slot has 243 different ways that you can land some money. The maximum amount of money that you can place per spin is $300, which makes it a great game for the high roller. Those who do not like to bet big will find plenty of betting ranges that suit them.

Regarding the symbols, you will find the common playing card symbols, which are obviously the lowest paying symbols in the game. You obviously want to win some serious money, so you should be more interested in landing Apollo and Starbuck along an active payline as you can receive up to 200x your wager if Lady Luck is on your side.

What about the  bonus features? Well, the game logo is the wild symbol, and this will always appear stacked on the first reel, increasing your chances of winning. The scatter symbol in the game is spaceship and if you manage to land three anywhere on the reels you will receive 15 free spins and any wins that you are lucky enough to get will be tripled. Ion Storm is a bonus feature that is randomly activated, and this feature will turn up to 5 reels wild to drastically increase your odds of winning. There are three modes in this bonus feature: Run, Fight, and Normal. In Run mode, wins are from right to left and left to right and the card symbols can change into mystery symbols. In Fight mode, random symbols will change in wilds, and the wilds can divide in two to make even more wins.

You are probably wondering what the RTP of this slot is, right? Well, it stands at 96.6%, which, once again, is not the highest around, but it really is nothing that you should turn your nose up at, especially when you take into account the bonus features available.