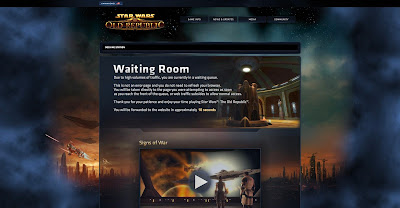 Star Wars: The Old Republic is scheduled to launch December 20, 2011 and BioWare’s expectation for its future is huge. With all the time and energy put into this MMO, BioWare bets big that it’s going to be a big hit. The SWTOR headquarters is located in Austin, Texas. This seems fitting to some since the Lonestar State has the slogan “everything is bigger in Texas” and SWTOR is one of the largest MMO to ever be released.

Fast Company tells us how BioWare bets big with SWTOR. Is it a bet that will pay off in time for the company?

BioWare has put 6 years of testing and debugging into the game and logged 4.6 million hours of beta testing. They are now ready to see if the efforts they’ve put into the game are going to pay off. Will gamers respond to this MMO the way they expect them to and can they keep their interest long-term?

There are many reasons why this game carries risk with the company. Charging for a video game in a weak economy when there are so many free games around could be risky. However, the company believes gamers won’t mind paying when the MMO gives them something worth paying for. In order to make a profit, TOR needs 500,000 gamers to subscribe and play the game during the first year.

Electronic Arts and BioWare have a big competitor in Blizzard’s World of Warcraft who has over 11 million players, so this is a big step for the company. Will they live up to the expectations?

With a launch prediction estimating 3 million subscribers, they’re certainly off to a great start.