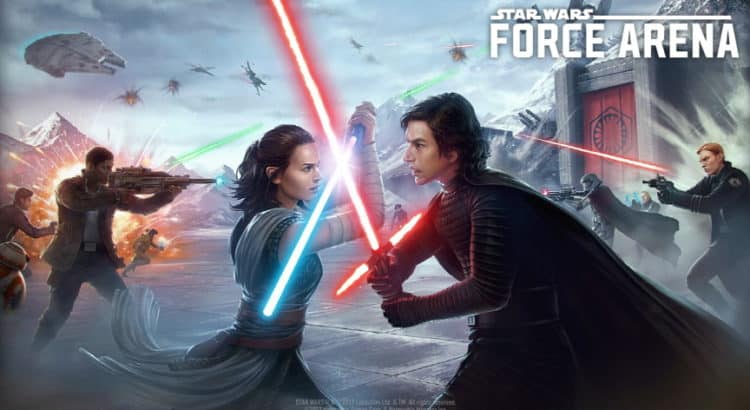 An update for Star Wars: Force Arena is ready. This one  features some balance adjustments to hopefully give more exciting experiences in the arena. Other improvements are included here, so check out the details below:

A Balance Patch is here to make some changes for some cards in the game.
All numbers listed in the Balance Patch are based on the cards at Level 1.

Rey
Rey’s Mind Trick is one of the most powerful skills in the game. It changes the tides of battle towards her side by converting Organic enemies into her allies. But sometimes, that gave a very negative experience to Dark Side users, as they had to watch their allies becoming their enemies helplessly. A decision to increase the Cooldown of her skill a bit has been applied. It’s still powerful, but it will need more discretion when using it.

Luke Skywalker (Ahch-To)
The legendary Jedi Master, Luke Skywalker, is showing a great power that suits his reputation well in the battlefield. He is able to let his allies attack safely by summoning a Projection of himself that taunts nearby enemies, while able to call more allies into the battlefield since his Focused Mind increases the Energy recharge rate. But for sake of game’s fairness, it has been decided to partially weaken his Projection skill and Focused Mind special ability.

Obi-Wan Kenobi
Obi-Wan is a Leader who uses a very defensive tactic. He protects his allies by using his skill to taunt enemies and initiating a defensive stance to defend against attacks. But since the taunt doesn’t affect Tech units, Squad Leaders’ preference on him wasn’t that high. For this, the taunt effect of his skill to include Tech units has been added. Also, his special ability was adjusted to endure enemy attacks a little bit longer.

Kanan Jarrus
Kanan Jarrus has great skill on reflecting blaster attacks off with his excellent Lightsaber skills. But because the speed of reflection was too fast, he showed too much efficiency on situations where enemy blasters were raining on him from all directions. It has been decided that his reflect blaster ability be weakened to prevent him from being invincible towards all kinds of blaster attacks. To make up for this change, his HP was increased to maintain his merit to protect allies.

Kylo Ren
Until now, Kylo Ren’s ‘Freeze’ was only applied to Organic enemies. Its performance, however, was little bit inadequate compared to Supreme Leader Snoke, who can immobilize enemies including Tech units with two taps on the screen. It has been decided to improve his skill to consider fairness among each Leader and to raise the prestige of Kylo Ren as the New Supreme Leader. From now on, his mercilessness will not discriminate whether the enemy is Organic or Tech.

Focused Rage
Kylo Ren’s Focused Rage Unique card shows exceptional efficiency. When this card is used, it makes him able to fight against a lot of enemies, since it changes the normal attack to deal area of effect damage, and further reduce damage received. Even the powerful attack of enemy turret couldn’t stop his rage. It has been observed that the excessive strength of this Unique card harms the strategic aspect of the game, thus it has been decided to decrease the Decreased Damage and its Rage Duration. From now on, Kylo Ren should rely on his allies than using Focused Rage excessively.

Governor Pryce
Governor Pryce, the Unique card of Grand Admiral Thrawn, is essential to survive as long as possible because she helps recharges Energy from time to time. It is true that her survival rate is lower than the Leader’s, and it’s hard to show her maximum efficiency because of the characteristic that they cannot be controlled by Squad Leaders. Her overall AI has been improved to increase her efficiency and get a better advantage.

Yogar Lyste
Yogar Lyste helps nearby allies, including his Leader Agent Kallus, to attack more aggressively by supporting them from time to time. But, it appears that Yogar Lyste had a hard time keeping up with Agent Kallus who has great mobility. To solve this problem, his overall AI has been improved as well to support Kallus by shortening the distance between them faster.

Dewback Trooper
The Dewback Trooper was usually used to attack enemy Turrets because he could endure enemy attacks with his high HP, despite his slow Movement Speed. But since it attacks every enemy on its path, it moves around to find the nearest enemy, so it has been neglected by many Squad Leaders. It has been decided to completely change the combat pattern to help increase the pick rate of the powerful Dewback Trooper.

Taunt is a very powerful ability that forces enemies to attack the one who used the skill. Also, it was the only way for low HP allies to attack safely. But it has been evaluated to be useless for the current battlefield with tons of Tech units since it only applied to Organic units. Now, Taunt is also applied to Tech units. Protect your allies and claim victory by using cards with this newly reformed Taunt ability!