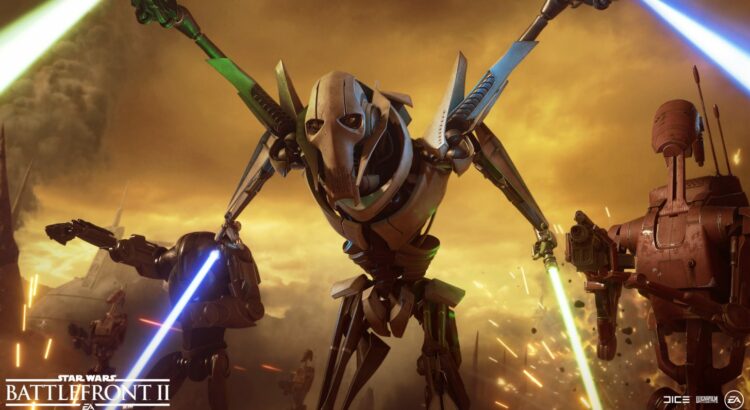 During the October event update, EA announced that General Grevous would be released on october 30. Below is the newest Community Transmission. and a cover of the essentials of the most recent addition to the heroes and villains roster.

“The drums of conflict are my beating heart. The fire of conquest rages through my veins. Strong, young lungs breathe in air laden with enemies turned into ashes. It is here that I thrive. I have toppled nations. I have slain kings. I have murdered legends. My name has been feared by warriors… and cursed by widows.” – General Grievous, The Clone Wars: The Dreams of General Grievous

General Grievous inspired fear across the galaxy as the leader of the Confederacy of Independent Systems’ droid army. Always the strategist, Grievous made it a habit of escaping the clutches of the pursuing Jedi. Only after countless battles against Obi-Wan Kenobi, did Grievous’ ruthless warmongering for invading worlds and engaging Jedi in combat, come to an end.

As far as villains go, General Grievous, as seen in Star Wars™: Revenge of the Sith™, is one of the most complex that we’ve ever made for Star Wars™ Battlefront II.

While he will make use of two lightsabers for his regular attacks, some of his abilities do bring his other two arms into play. Grievous coming towards you with four lightsabers swinging is a sight to behold, and one challenge that our animation team had to overcome.

There are few sights as chilling as the one of General Grievous scuttling across the floor on all six limbs. It’s not only a great way for him to escape a fight, but it’s also something that strikes a certain eerie fear into you as he approaches. You’ll get to experience this first hand with his Claw Rush ability.

It was hugely important to us that we captured the essence of General Grievous, ever the master tactician. Imposing up close, but also able to make a swift exit. We took inspiration from his appearances all across the Star Wars™ universe, most notably the movies and The Clone Wars Animated series.

Who could forget the showdown between General Grievous and Obi-Wan Kenobi where the general used two rotating lightsabers? This scene from Star Wars: Revenge of the Sith would go on to serve as inspiration for his Unrelenting Advance ability and his appearance.

It would be amiss to talk about General Grievous without mentioning some of the iconic voice lines that he has available. Get ready to hear the hacking cough and, “You are a bold one,” among many other iconic lines. We went into detail on the voices of our heroes, General Grievous included, in a recent Community Transmission. Head on over here to read all about it.

A challenging hero to create but one we’re incredibly excited to be welcoming into Star Wars Battlefront II. Let’s dive into his abilities, star cards, and more.

General Grievous focuses on a target in front of him and rushes to them while doing a stab motion with all 4 of his lightsabers.

General Grievous goes down on all 6 limbs and rushes forward, damaging and pushing away any enemies in his path.

General Grievous spins two lightsabers over his head and can advance on his enemies. While this is active, Grievous blocks any frontal attacks and damages enemies in front of him.

Voice LinesThere are a number of iconic voice lines that have been added for General Grievous, as well as some entirely new ones. A small selection of these are below:

We recently went live with a Community Transmission dedicated to Hero Voices, you can catch up on that here.

The Battle Damaged appearance will be classified as rare and cost 20,000 credits or 500 crystals.General Grievous will cost 35,000 credits and will not be purchasable for crystals. Remember to do your daily challenges and to log in each day for your daily crate reward!

We’ll be back in a few days’ time to talk about everything else that is due to arrive in the General Grievous Update on October 30. 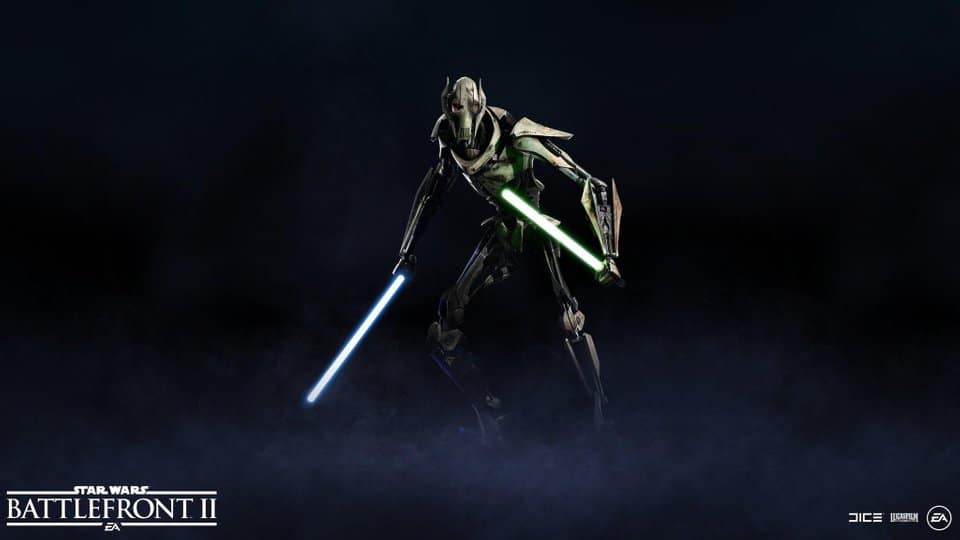 The General Grievous Update also introduces a couple of tweaks to the game. Learn more about the reworked Hero Health Star Cards and time-limited Clone Wars-era playlists for Hero Showdown and Heroes vs. Villains.

Becoming One of the Galaxy’s Most Notorious Villains

A towering Kaleesh, the mere presence of General Grievous caused unease amongst his enemies.

After sustaining a critical injury, Grievous’ body was transformed, and he was later taught the art of lightsaber combat by the Sith Lord Count Dooku – becoming a true embodiment of terror.

He was the Supreme Commander for the Confederacy of Independent Systems, or Separatist Alliance, in the Clone Wars against the Galactic Republic. Throughout the war, he led the droid armies in battles across the galaxy and encountered the Jedi and General Obi-Wan Kenobi numerous times. He escaped almost as many. Fostered through their clashes, General Grievous formed an arch nemesis relation to the Jedi Master.

In Star Wars Battlefront II, General Grievous is designed to instigate fear and feel like an overwhelming opponent. His body frame is among the largest compared to any other character in the game, and he engages in combat with two – sometimes four – lightsabers.

For base attack sequences, General Grievous swings two lightsabers. While on defense, he can also use the same to deflect enemy sabers and blaster shots.

But the skilled fighter was also known for his signature moves featuring no less than four Jedi weapons, which were all conquered from their previous owners (we’ve modeled his lightsabers after their appearances in Star Wars™: Episode III – Revenge of the Sith™). In Star Wars Battlefront II, we’ve transferred a couple of those moves to his Abilities.

First, we have Thrust Surge. This one was referenced from an encounter between Grievous and Obi-Wan in the Clone Warsseries. The attack thrusts Grievous forward with all four lightsabers in a stabbing motion, dealing damage and throwing the target to the ground.

The second is Unrelenting Advance. As seen in another battle with Obi-Wan Kenobi in Revenge of the Sith, Grievous forms a spinning lightsaber wall in front of him, with sparks igniting from the floor, as he advances like a horrifying machine. Going into Unrelenting Advance, General Grievous blocks all frontal attacks while dealing damage to anyone foolishly standing in his way.

Speaking to his strategist side, General Grievous’ Claw Rush Ability lets him flee the scene in the blink of an eye. Once activated, he goes down on all six limbs and rushes forward, damaging and pushing opponents out of his path. An unsettling sight for enemies to behold – and highly efficient when in urgent need of an escape route.

The Different Appearances of General Grievous

In the game, General Grievous will don his Jedi Hunter Appearance by default with an additional Battle Damaged Appearance*** also available on October 30. Scuffed from combat, most likely while looking to add to his collection of lightsabers, this Appearance surely inserts some battle-hardened warrior oomph to General Grievous’ already intimidating look.

Another to-be-announced General Grievous Appearance will come on November 28 with the Battle of Geonosis Update, marking the arrival of Obi-Wan Kenobi and the planet of Geonosis to Galactic Assault.