While I don’t like this item as a “Canon” mount in the Star Wars universe, and I understand roleplayers who would trash this mount. It is for fun, after all this is also a game and games are supposed to be fun.

Lately I have put the daily grind on the shelf and started playing the game for fun. Meaning that I can sit for hours dressing my characters in expensive gear, while pointless for stats and all, I am havingagoodtime!

The fact that this type of item is released gives the impression that BioWare, while serious about the game and lore, wants to convey the fun aspect of the game as a game. Last christmas I cringed when I saw the Czerks life day mount, until I met a guy called Santa who had dressed his character accordingly.

I mean after all it is Star Wars. All the movies deliver some of the driest one liners known to man, and we love it for it. Not arguing. Just satsing that, yeah it does lighten my mood when Santa roams by this year on a tauntaun /y (yelling) hohoho before killing off imps and pubs with his red and white light Saber 🙂 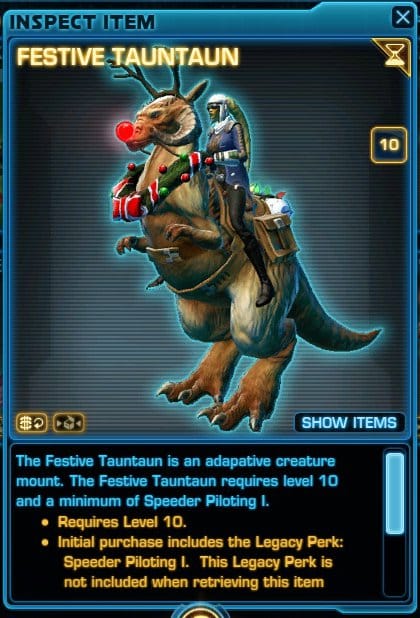