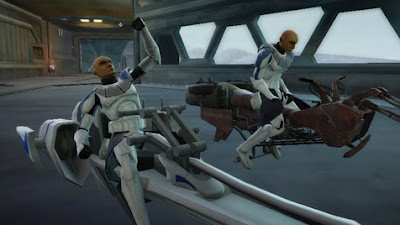 Back in march we reported that Star Wars: The old republic wasn’t the only Star Wars mmorpg in development. Today Sony Online Entertainment announced new MMO universe, this one adopting the animated Star Wars: Clone Wars

setting. It’s fully a browser-based experience, allowing players to choose to be either a Jedi, Padawan or a Clone Trooper and along-side their favorite heroes such as Anakin Skywalker or Obi-Wan Kenobi. 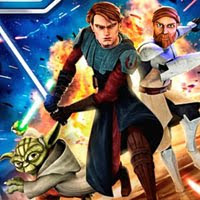 Sony Online Entertainment and LucasArts are developing Star Wars: Clone Wars Adventures, a free-to-play virtual world based on the Star Wars: The Clone Wars animated series airing on Cartoon Network, set to launch online and in retail stores this fall.

While LucasArts published SOE’s last MMO based on the George Lucas franchise, Star Wars Galaxies, the San Diego-headquartered studio is both developing and publishing this title. The companies hope to introduce the Jedi, Padawan and Clone Troopers saga to a new generation of Star Wars fans with Clone Wars Adventures.

In this browser-based virtual world, players will be able can pilot starfighters, fight other starships, duel against “icon adversaries” with their custom lightsaber, play minigames like Droid Programming and Speeder Bike Racing, and play an embedded collectible card game featuring characters, creatures, and vehicles from The Clone Wars show.

While Clone Wars Adventures is free, players can purchase a monthly membership with unspecified advantages. They can also buy outfits, items, and accessories through microtransactions with Station Cash, SOE’s virtual currency.

As with Free Realms, SOE’s tremendously successful free-to-play virtual world with more than 10 million users, Clone Wars Adventures is designed to be a safe online environment for kids and families. It will offer customizable safety options, such as pre-canned chat and playtime settings for younger users.

“Clone Wars Adventures is the ultimate destination for fans of The Clone Wars series and will bring the action and excitement of the show to players online so they can experience The Clone Wars universe firsthand” says SOE president John Smedley.

Smedley adds, “We’ve worked with LucasArts and Lucasfilm to create a virtual world that is seamlessly integrated with the TV series and a true extension of the show. It’s also just flat-out fun to play.”

Clone Wars Adventures will be free to play with an optional membership, so everyone will be able to sample the goods without worry. The official website is chock-full of info and screenshots, although a lot of the smaller details are obviously forthcoming. We’ll be able to get a closer look at this title E3 is up later this month, so stay tuned!

Other features include a lot of customizing options with unique outfits, items and your own protocol droid. The social settings will allow you to invite your buddies over to you own in-game home to chat about your latest adventures and accomplishments. With plenty of mini-games including a Tower Defense-style one holding back waves of Battle Droids, brain-teasing Programming puzzles, speederbike racing and space faring in your own Star Fighter, Clone Wars Adventures is set to recruit everyone in the battle to defend the Republic.