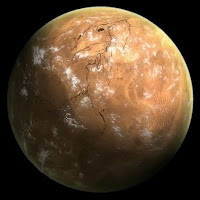 Tatooine (pronounced tætu’in) was a desert world in a binary star system in the Arkanis sector of the Outer Rim Territories. It was inhabited by poor locals who mostly farmed moisture for a living. Other activities included used equipment retailing and scrap dealing. The planet was on the 5709-DC Shipping Lane, a spur of the Triellus Trade Route, which itself connected to the Sisar Run. The planet was not far from the Corellian Run. It had its own navigation system. However, it would still play a role in galactic events, serving as the home of Anakin Skywalker. It was here that Jedi Master Qui-Gon Jinn recognized Anakin’s potential to become a Jediand where he introduced him to Obi-Wan Kenobi, his future master and mentor. Tatooine was also the home of Anakin’s son, Luke, where he lived until his early adulthood. The planet built up a very bad reputation, often being viewed as the cesspool of the galaxy due to the high-level of criminals who could be found onworld.

You can read much more about Tatooine here, and check out the Datacron locations below:
Don’t forget to check out constantly growing list of guides for Star Wars: The old republic


38 – [Aim +3] X-626 Y:-30 This Datacron is easy to obtain. Go to Mos Anek, and travel north until you find a large sand ramp to the west. Go up the ramp and to the back of the area, which is the Transport Ship Crash Site and follow the western edge until you see a cliff with what looks to be part of a broken ship. Look down and carefully jump to each ledge to retrieve the Datacron located on a metal platform.

39 – [Cunning +3] REPUBLIC X2139 Y:-3673 – inside of Anchorhead. First, to go to the northwest edge of Anchorhead and look for a sand dune that is almost at the top of the wall. Follow the wall all the way across, which will lead you to rooftops. Then go left(north) along the buildings. You will go across 3 different blue canvases. At the end of the third canvas look down and to your left where there is a dome shaped roof. The Datacron is located right next to it below you.

[Cunning +3] EMPIRE – X:721, Y:3132 Head to the rocky ledge at 444, 3091. Jump on to the large red caonpy and head to the north corner. Drop on to the building and head north-east and jump down to the lower roof. Head noth till you see a wall that runs east to the next building. Jump across that and head south once you are on the ledge of the dome. Jump on from the wall, to the exhaust port then the wall. Jump onto the scafolding, then to the pipe on the side of the cat walk, then the catwolk itself. Cross the catwalk and carefully jump on the railing/ledge to make the jump to the pipe on wall easier. Then jump to the other vent, then the scafolding. Cross the wall to the building, and go around (either way works) till you are on the south side mid-point. Look down and drop on the small wall section between the buildings. head south and you will find the datacron on the lower roof, opposite the Mos Ila Market

40 – [RED DATACRON AND BLUE MATRIX SHARD/ Strength +3] X: -2391, Y:-1381 These two Datacrons are located in the same area. First, in the southwest corner of The Dune Sea there is a Jawa Sandcrawler (at -2340,465). Get on top and wait for a balloon to appear. Ride this balloon for 60 minutes (make sure you do not go AFK during this time). Unconfirmed, but it shows up at the top of each hour at the sand crawler. You will eventually see a Sandcrawler with a glowing Blue Matrix Shard Datacron. Jump down onto the Sandcrawler to obtain the Datacron. NOTE! You must jump on the side with the data cron, if you wait too long you will miss your oportunity at the Blue Shard. The Balloon does not stop to let you off.

For the Red Datacron go to the edge of the Sandcrawler (the side closest to the Datacron) and carefully jump down to a small platform sticking out of it. There is a small compartment with the Datacron sitting inside.

41 – [+Strength] Directly below #40. You can actually get this by jumping below it and clicking, but this might change.

42 – [Willpower +3] X:2073, Y:-577 First, cross the bridge into the Eastern Wound area and go south west along the ridge along the valley. There will be some large rocks to your right, and a small nook (location 2047, 440). Look down, and see the large rock formation jutting out in the valley; it has a flag to signify the entrance. Note that you will take damage from this fall, so just replenish your health before going on. Jump down and enter the cave. Kill any Sand People in the way and just follow the cave all the way and you will see the Datacron.