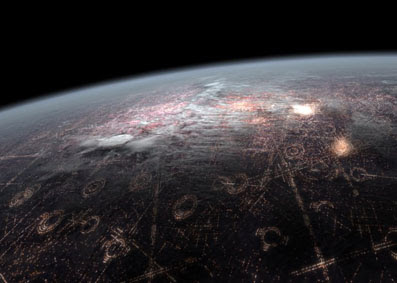 The Galactic Center of Coruscant (pronounced /’kʊɹəsɑnt/), originally called Notron, also known as Imperial Center or the Queen of the Core, was the political hub of the galaxy for millennia. It was generally agreed that Coruscant was, during most of Galactic history, the most politically important world in the galaxy. At various times, it was the capital of the Galactic Republic, the Galactic Empire, the New Republic, briefly the Empire Reborn, the New Republic again, the Yuuzhan Vong Empire occupation, the Galactic Alliance, the Fel Empire and Darth Krayt’s Galactic Empire. These governments, that all controlled Coruscant, controlled the galaxy in the process

Read all about Coruscant here, and check out the datacron locations below:

4 – [Endurance +2] X: -3626 Y:-1293 Z: 151* Behind the large pile of crates and boxes in Graffiti Square (X: -3773, Y: 132, Z: -1306), you can climb up and over various debris. From there, travel to the balcony via the small set of pipes. There is a large gap in the ledge about half way to the datacron, use the large broke pipe to cross the square to the opposite balcony. Drop down onto the pipe that travels back and cross over onto the large neon sign. Run and jump from the sign to the last ledge where the green datacron is located.

Note: While on the map the location is given as “Black Sun Market” the boxes you need to climb are located in the North West corner of Graffiti Square.

5 – [Cunning +2] : 1022 Y:-1036 Z:-3970* You’ll see some crates stacked in a nice formation down the center of an ‘isle’ you have dividing two main paths. This is easiest to see on the northernmost part of the map headed west. Be careful and time your jumps onto the pipe and you’ve got it!

6 – [Yellow Matrix Shard] X: 3744 Y:-4473 You want to start in the north eastern most corridor in the works, Pipeline Passageway, the only way to get here is to travel back north through the southern entrance. This corridor is inhabbited by Cthons of several varieties. At the end of the hallway before you turn left to drop back down into the first level (there is an Elite Cthlon on the ledge) climb the boxes to get on to the pipe (X: 1171, Y: 4422, Z: -2282). Follow the pipes the run along a large portion of the level to the datacron. Be careful while walking and jumping, it’s easy to fall down to different parts of the sector below.

7 – [Strength +2] X: -3005 Y:3030 Jedi Temple – Look for the huge column that takes you up to the second level. Once up there turn left and follow the edging to where a Dark Sith Anew Xydes is meditating – eliminate him or leave him, overlooking the center of the area is an extension with the holocron awaiting you.

8 – [Presence +2] X: 650 Y: 13 This one isn’t very hard. Simply hop onto the lift which you’ll find just to your left after crossing the bridges. BEWARE: There is an elite mob that guards this area.