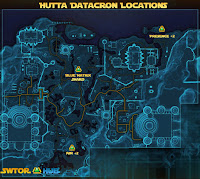 Nal Hutta (Glorious Jewel in Huttese) was the capital of Hutt Space and was located in the Y’Toub system. It was formerly known as Evocar and was the original home world of the Evocii, who were ousted by the Hutts in 15,000 BBY, who migrated from their original home world of Varl along with their servants the t’landa Til. It was sometimes referred to simply as Hutta at around 4000-3000 BBY. The planet was controlled by the ancient ruling Hutt families, who also ruled its moon Nar Shaddaa from Nal Hutta.

Read all about Nal Hutta here, and check out the datacron locations below:
Also if you are interested in Lore, check out out guide to the Hutt cartel here.
Don’t forget to check out constantly growing list of guides for Star Wars: The old republic
Hutta
1 – [Aim +2] X: -97 Y:21 Z:861* This datacron sits on the eastern side of a steep hill that must be accessed by walkiing up a fallen over silo at -162,910. south of the renegade Evocii camp in the bog with the Fa’athra Mining Droids.

2 – [Presence +2] x: 945, Y-128 To access this datacron you need to walk and jump across a series of pipes beginning at 503,-20. It is recommended to only jump from flat square sections to other flat sections as the rounded pipe segments have large sections that you cannot stand on and will slide to the ground. The datacron sits on the raised island guarded by a pair of Venomous Chemilizards

3 – [Blue Matrix Shard] X: -10 Y:-12 Z:324* The entrance to the sewer maintenance tunnel is located at -17, 228 on the surface next to Gedron Hix. After entering the tunnels, turn right at every turn available and you will see it on the ground past the B3-4T Disposal Bot Champion enemy. It is recommended to claim this datacron while on the Heroic mission “Factory Recall””