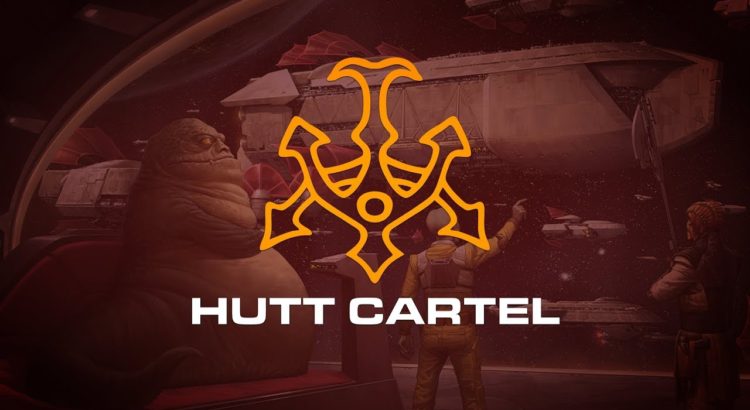 The Hutt Cartel were a powerful crime syndicate- a business alliance of Hutts. It had a personal military of both an army and Starfleet and waged war with the Zann Consortium until the Battle of Hypori.
History
The Hutts have a rich history. During the time of the Great Galactic War, the Hutt Cartel grew displeased with the Sith Emperor because he left them out of his plans and intrigues. But the Republic was unsuccessful in getting the Hutts’ support against the Empire so the Cartel remained neutral in war, like many others who made up the criminal underworld.
The Cartel had control of the Kaer Orbital Platform a few decades before the Clone Wars after they forced the InterGalactic Banking Clan off the Platform. They later abandoned it, finding it useless.
Clone Wars
During the Clone Wars, Boorka the Hutt held considerable power. He co-operated with Sev’rance Tann during the early days of the War and gathered information about the Decimator a Republic superweapon which was still in development. Annoyed by the trade activity of the Galactic Republic, he agreed to reveal their secret plan to the Separists.
For turning against the Jabba, he lost a great deal of forces, except for some mercenaries but he was protected by the Separists and in exchange for giving them the information about the Decimator, he requested that Tann destroy the Republic Spaceport.
Boorka was later killed by Republic forces during the Second Battle of Tatooine, at the encouragement of Jabba the Hutt, who placed a large bounty on his head. Jabba assisted the Republic General Echuu Shen-Jon in return during the Second Battle of Tatooine.
Galactic Civil War
During the Galactic Civil War, Jabba formed a successful alliance with Tyber Zann. This was successful for some time until Zann stole a valuable Sith artifact on Felucia. Zann was caught and imprisoned on Kessel. To cover the costs of the stolen artifact, the Hutt Cartel acquired all of the Zann Consortium assets for compensation.
Later, Zann would break out of Kessel and rebuild his forces. He would then corrupt many of the Cartel’s planets. This conflict lasted until the Battle of Hypori which left the Cartel crippled but far from destroyed.
Hutt Space
Hutt Space was a region of the galaxy found on the border between the Mid Rim and the Outer Rim Territories. It was near the entrance to Wild Space and bordered on the Tion Hegemony. Hutt Space was named for the Hutt species, who dominated the region. It is not certain how many planets occupied Hutt Space but some estimates range from a few hundred to a thousand inhabited worlds. 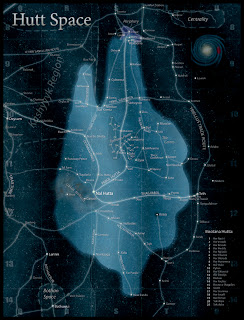 Politics
The Hutt Cartel was governed by the Clans of the Ancients—later known as the Hutt Grand Council- which was composed of every Hutt clan. The Hutt Grand Council ruled the region and would oversee the activities of the Hutt Clans as well as their criminal syndicates.
Hutt Space was considered a lawless expanse that have the most powerful and corrupt of the Hutt clans. It had an infamous reputation for piracy, smuggling and open criminal activity.
Hutt Empire
In Star Wars: Knights of the Old Republic, Bastila Shan says the Hutts never built an empire.
Between the fall of the Infinite Empire and the rise of the Republic, the Hutt Empire was the major power in the galaxy.
The Hutts continued to be a galactic power until the territory’s demolition in 26 ABY by the Yuuzhan Vong Empire during the Extra-galactic invasion.