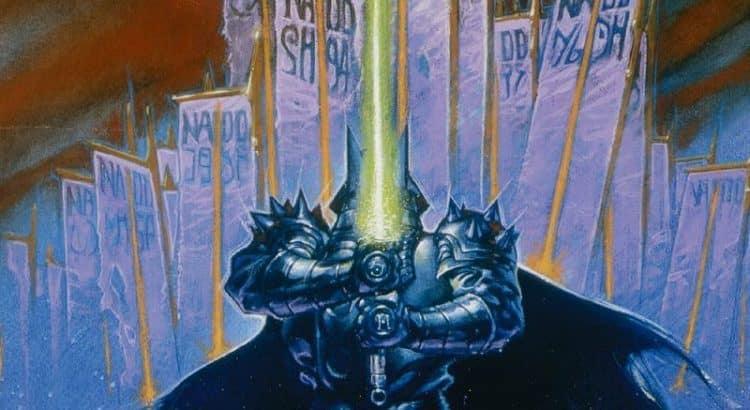 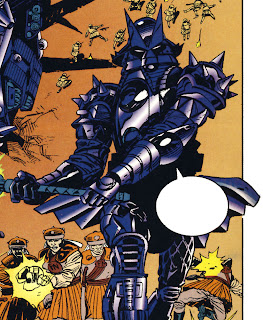 Warb Null was a dark side apprentice and King Ommin’s armored commander of the Naddist forces during the First Battle of Onderon in the Freedon Nadd Uprising. Originally named Shas Dovos, Null was formerly an aspiring young student of metalwork, though when a sinister Sith spirit tricked him into constructing a tainted suit of armor, he became a mindless servant of the dark side. The spirit resided in the very pages of an ancient Sith book discovered by Dovos in the wilds of his native planet Onderon, and eventually the spirit fused Dovos to the dark armor and renamed him Warb Null.

Null became the leader of the Naddists who raided the city of Iziz during the Freedon Nadd Uprising. They defeated the Onderonian forces, as well as a team of Jedi sent by the Galactic Republic, and successfully recaptured the sarcophagi of Ommin’s late wife Amanoa, and the former Dark Lord of the Sith Freedon Nadd. Later, Warb Null helped free Ommin from his life-support facility, though this time the young Jedi Knights he had previously defeated were too strong; Ulic Qel-Droma engaged the Sith warrior in a duel, and decapitated him. Null’s death was, in the end, insignificant to Ommin, who felt the armor-clad soldier had fulfilled his purpose. 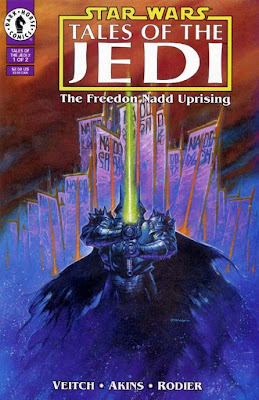 Biography
Warb Null was born under the name of Shas Dovos on the planet Onderon sometime during the height of the Galactic Republic. Dovos was a dedicated student of metallurgy in his youth, learning the intricate craft of metalworking. Onderon had a history of leaders who worshiped the dark side, so a great many ancient Sith artifacts were stored all over the planet. The great walled city of Iziz was the only area of the planet not tormented by vicious beasts, and some time before the Great Sith War, Dovos traveled to one of the wild regions on the planet during his studies, where he stumbled upon a hidden dark side treasury. The young Onderonian was Force-sensitive himself, and one particular Sith artifact piqued his interest—an ancient dark-side book hand-written by a member of the old Sith Empire. Dovos stole the book and returned to his home-city, desperate to uncover the secrets hidden deep inside the ancient document.

Initially, he was fascinated with the book, though soon his fascination turned into complete obsession. He spent years attempting to break the coding of the book, until he had forsaken his studies and lost interest in the other aspects of his life. He saw it as his destiny to uncover the book’s secrets and to wield its power. Eventually, he deciphered the Sith lore, and began construction on a set of specialized Sith armor, which would grant its wearer great power. In his forge deep beneath Onderon’s surface, Dovos used his basic Sith magic, combined with his extensive knowledge of alloys and metals, to forge the blackened helmet, breasplate and gauntlets of the massive suit of armor. After working for days on end, Shas Dovos’s suit of armor was complete; however, he was having doubts about his worthiness to wear it. He was unsure of his grasp of the Sith magic necessary to produce such a weapon, worried that it would be wasted on someone who had to resort to theft to acquire the armor.

However, he soon overcame his doubtfulness, reasoning that if had not been for him, the knowledge behind the armor would still be hidden in obscurity; if anyone deserved to wear, he did. Suddenly, a voice spoke out, telling Dovos that he would wear the armor. The spirit of the Sith Lord who had written the book centuries ago appeared, telling the young man that it was the keeper of the book, that without the spirit keeping safe, the Sith lore would have crumbled to dust decades ago. Shas Dovos became fearful, and finally realized the dangers of his taking the book. The Sith protector told Dovos that it had been slowly and subtly influencing him, affected his dreams and thoughts, and making him become obsessed with the construction of the armor. The spirit declared Dovos its disciple, telling him that he would become an “extension” of the Sith Lord, using the Sith spirit’s Force abilities and Dovos’s powerful armor to help restore the glory of the Sith Empire. Dovos was still scared of the Humanoid spirit, though the being was far too powerful for the former student to defeat. The Sith spirit re-named him Warb Null, and used its ancient powers to fuse the new Sith disciple to his newly crafted armor. Warb Null became a mindless Sith Warrior, remembering little of his previous life. Warb Null had been tricked into creating the armor by the Sith spirit, and now he was nothing more than a pawn of the long-dead dark sider. 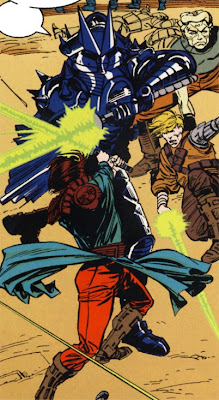 Warb later constructed a large, green-bladed lightsaber, with a hilt several times the length and width of a usual lightsaber—he wielded it aggressively, though he was undoubtedly skilled with the weapon. The Sith spirit taught him several old Sith powers—all of which would be necessary in the mission which the Sith warrior had been assigned. Onderon’s queen, a Sith worshiper herself, had been killed by a Jedi task Force during the Beast Wars of Onderon, and her sarcophagus, along with that of Freedon Nadd, former Dark Lord of the Sith, were being relocated to one of the planet’s moons, a jungle-world named Dxun. The late Amanoa’s husband, Ommin, was a former student of Nadd and a powerful wielder of the dark side. Ommin remained alive during Warb Null’s time, but the ancient Onderonian was slowly dying, and unable to return the dark side to Onderon himself. Through the spirit, Ommin enlisted Null to lead an assault on the world’s capital, Iziz. Null, aided by hundreds of loyal Naddists, was to reclaim the sarcophagi and remove them to the Sith warrior’s underground base.

The Freedon Nadd Uprising
Null and the Naddists devised a plan to steal Amanoa and Nadd’s sarcophagi from the streets of Iziz—they would use great machines to emerge from their underground base, take hold of the bodies of the deceased dark siders and return to their base. Several of the wealthier Naddists purchased several Akin-Dower Groundborers—colossal machines used to create massive tunnels—and fitted them with medium blasters, turning the mining vehicles into offensive monstrosities. The machines could hold hundreds of men inside, with enough space to store the two sarcophagi, so they were very suitable for their mission. 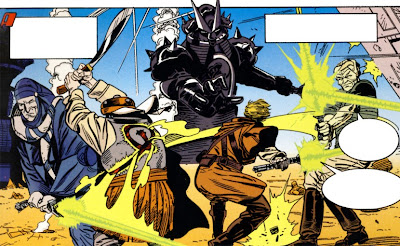 In 3,998 BBY, Warb Null led the assault on Iziz which marked the Freedon Nadd Uprising. Amanoa’s daughter, Queen Galia had married Oron Kira, the leader of the Beast Riders, thus ending the traditional animosity between the Onderonian aristocracy and the Beast Riders. The two new rulers of Onderon led the procession of the great sarcophagi to the shuttles which would transport them to Dxun, closely followed by Jedi Master Arca Jeth and his apprentices, Tott Doneeta, Oss Wilum, Cay Qel-Droma and his brother Ulic. Null and his loyal Naddist warriors then suddenly burst from the ground in one of their vast war machines, charging toward the procession. Null had his men take the Nadd and the queen’s bodies, telling them he would deal with the Jedi. As Null approached the group of Jedi, Master Arca, the most powerful of them by far, was struck by an invisible blow through the Force, incapacitating him and leaving the four Jedi students to face Warb Null alone. 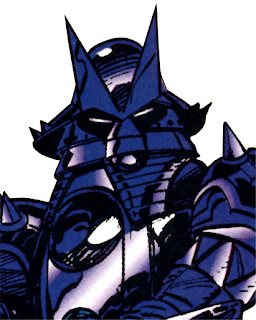 The huge Sith warrior clashed with the four young Jedi, who were slowly being demoralized by the dark energies permeating from Null’s blackened armor. Their sabers clashed many times, though the man formerly known as Shas Dovos proved too strong for the Jedi, ensuring that they would not interfere with the Naddists attempts to reclaim the sarcophagi of the former Sith worshipers. Meanwhile, the other soldiers loyal to Ommin had successfully managed to steal the two stone coffins, despite the efforts of Oron Kira and his Beast Riders. Realizing his task was complete, Null fled back to the war machine, where his men had transported the sarcophagi to. When Null reached the machine, they retreated down into the sub-levels of Iziz, ready to commence the next phase of their plan.

Warb and the Naddists remained deep in the subterranean tunnels of Iziz as Master Arca—now recovered from his mysterious attack—and the other Jedi visited King Ommin in his life-support city below the Onderonian palace. Arca thought Ommin to be a powerless, crippled old man, however in truth Ommin was still very powerful. At the appearance of the spirit of Freedon Nadd, Ommin suddenly sprang to action, smothering Arca with dark side energies and calling for his loyal servant, Warb Null, and the remainder of his warriors to arrive. Null and the finest of the Naddist soldiers smashed through the facility’s walls, launching yet another surprise attack at the Republic representatives. Ommin fled with Arca’s limp body, while Ulic Qel-Droma, desperate at the apparent loss of his master, lashed out at Warb Null, who was busy keeping the other Jedi at bay. Ommin and Nadd knew their pawn would be defeated by the vengeful young Jedi, though they did nothing to prevent it, as they recognized the potential for Qel-Droma as a Sith. The young Human Jedi jumped through the air, surprising the iron-clad Sith warrior. In one blow, Ulic Qel-Droma decapitated Warb Null, ending the Onderonian’s brief time as a Sith. Warb Null’s death was mourned by none; he had left behind and forgotten his former life, while his dark side superiors felt tha the had succeeded in fulfilling his purpose. Ultimately, Warb Null was expendable to those he served with loyalty.

Join the forum discussion on this post
7
SHARES
ShareTweet