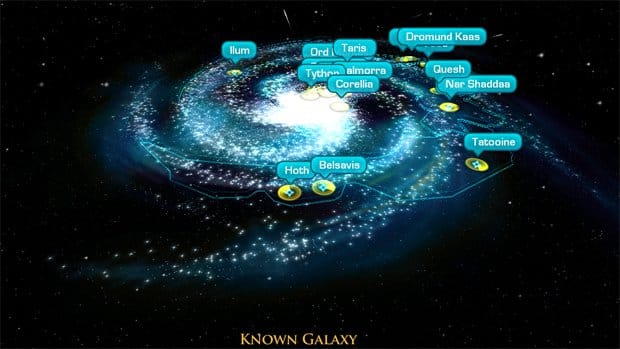 BioWare posted a bew blog post detailing the changes to core worlds with the Knights of the Fallen Empire. Check it out:

Drawing inspiration from the success of last year’s 12x XP boost and the more recent Epic Story XP Boost, in Fallen Empire we’ve altered the core leveling experience from 1-60 for all players, making it quicker and more story-centric. Our goal is to create a tighter leveling experience that alleviates the fatigue associated with having to complete dozens of Missions per planet and that allows players to focus on the core storylines of their characters and companions amid the backdrop of the Great Galactic War.

To accomplish this we’ve established a new critical path, reducing the number of Missions players are required to complete in order to progress along with an adjusted experience curve. Additionally we’ve made a number of changes to Heroic Missions and re-classified Missions not considered part of the critical path as Exploration Missions. Here is some more information on those Mission types:

Critical Path: Should you choose, these are the only Missions you need to do in order to level from 1-60 without falling behind or getting too far ahead of the curve. These are also the Missions we consider most critical to the story of The Old Republic from level 1-60.

All Class Missions and the core story arcs for each planet are part of the critical path and we’ve updated these Missions to be easily recognizable on the map due to their purple triangle icon. They also have a purple display name in your Mission Log. Additional Missions on the critical path will retain the classic gold triangle icon and Mission log text.

Heroic Missions: On all planets up through Makeb the existing Heroic Missions have been revised in several ways in order to make them more accessible to all players:

Exploration Missions: Rather than cutting the missions that are neither Heroic, nor part of the critical path, we’ve created a new category of Exploration Missions. The ability to see or obtain these missions is disabled by default, but can be toggled on via a check box on the Map screen. These Missions are represented by a triangle with a star next to it.

Once activated Exploration Missions will still provide the same kinds of credit, experience, and item rewards you’re used to getting, allowing you to augment your leveling experience if you want too. With our new level sync  you can even choose to do these Missions later without feeling vastly overpowered.

Our goal with these changes was to allow you to level up in The Old Republic quickly, and by only requiring you to see the main story content from your Class and each Planet. Of course, if you want to level through group content such as Warzones, that option is still there too. We hope you all enjoy all of the changes we have made throughout The Old Republic on your journey from levels 1 to 60.