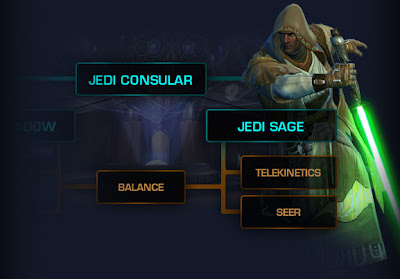 Fun stuff from BetaCake this week for those who don’t spoilers and want to learn more about SWTOR. This review was sent via email to Betacake and includes detailed info about playing a level 50 Jedi Sage.
Betacake writes:
“The following article was sent to me through e-mail and its a review by a tester who played the Jedi Sage class and reached level 50 with it. I must warn you, he gives the game a subjective review and you should not take it for granted. Things he might hate in the game, might seem like the best thing ever to you. Either way, its a good write up, enjoy !”
The review is pretty long and detailed but be warned: SPOILER ALERT.
Here is a snippet:
Since the test phase is ending and people are wrapping up their reviews/input for the game I thought I would throw my 2 cents into the mix. Here is my review of the game from the perspective of a lvl 50 Jedi Sage. I’ll try not to include any story spoilers but the review will contain content spoilers. I will also rank the elements on the game from a personal perspective on a scale of 1 to 10 (1 being unacceptably bad… 5 being average for todays mainstream MMOs… and 10 being balls to the wall awesome). Played with max settings on a mid-high machine.

Needs serious improvement to stand out. Some limitations are understandable given the need to make all skins align to the basic interaction patterns (facial expressions, combat moves etc) so you can’t expect a Elder Scrolls type of character creator but even by current MMO standards the creator is disappointing. First impressions matter and since the character creator is the first game feature people get to experience it should make a good impression.

Keep in mind that many people will be spending hundreds of hours with their characters. Given the way character interactions work, unlike most other MMOs, we actually get to see the characters face… you don’t want the player to cringe every time he starts a conversation. You want him to be able to make his character as close to his ideal as possible (regardless if that means pretty/ugly/silly).

Whether you are looking to play a Jedi Sage or not, this SWTOR beta review will give you some valuable information about the game. Of course, it is still someone else’s opinion but it gives you more info to help you form your own ideas and to know what to expect when you get to play.