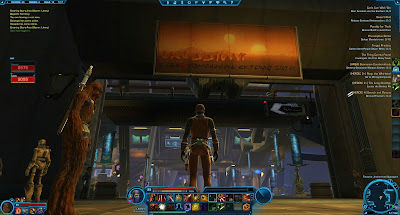 You may remember reading a review on IGN a few weeks ago written by Nick Kolan on Star Wars: The Old Republic (we brought you the recap). Kolan had a lot of good things to say about the MMO but some of the commenters called him an idiot (commenters are prone to such things, ya know) so some of the other members of the staff decided to review it, too. They wanted to give readers a second opinion of the game. It’s a pretty fun read if you want to check it out for yourself.

Here are a few of their comments.

Anthony Gallegos – IGN PC Editor had this to say. “Maybe it was because I knew I’d be addicted, but I really was opposed to Star Wars: The Old Republic early on. So many of the early demos I saw of it made it seem like “just another MMO,” but in reality it’s that and so much more.”
Mark Ryan Sallee – IGN Guides Executive Editor said, “SWTOR starts easily and gradually, introducing the player gently into what turns out is a massive, massive galaxy. I never really felt lost or overwhelmed until after I’d left Korriban, and that’s about the time I was ready to start feeling lost and overwhelmed. The game is big and complicated, no question. But it’s far from scary to a total neophyte like me. That must be a success.”
Stephanie Lee – IGN Guides Associate Editor writes, “That Star Wars: The Old Republic is a World of Warcraft clone with lightsabers is not an uncommon saying around the internet. Many SW:TOR devotees balk at the comparison, but the parallels between the two are plain as day.”
How do you feel about The Old Republic? Do you agree with the staff at IGN? Is this just another MMO or do you believe it will continue to be a huge success? One thing is for sure; it has certainly impressed a lot of people and gotten off to a great start.
Read more at IGN.
0
SHARES
ShareTweet