Today we feature the republic guild ” Imperial Security Bureau ” ISB is a small guild (around 23 members including alts) looking to increase in size to get ready for heroics and operations. They are a close group of dedicated players that like to have fun and help each other out.

Many of the members have experience from WoW and have played MMOs for quite some time. Right now they are looking for some cool people who want to run the end game material and have a good time. All classes/levels accepted! They are always helping each other out whether it’s sending gear, running someone through a flashpoint or leveling alts together.

Where did your guilds name come from?
The guild name stands for Imperial Security Bureau. It’s those Imperials you see in the movie wearing the uniforms. Our guild consists of many people who are very into the Star Wars lore. Here is a picture of an ISB agent, always makes me chuckle. The two guys on the right are ISB: 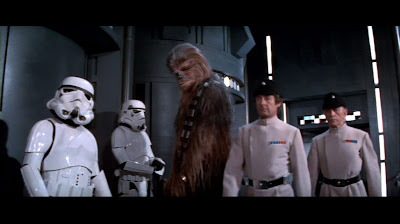 Can you give me a quick 2-3 sentence description of your guild?
A group of Star Wars fans who enjoy PVE and some PVP. We are always helping each other out whether it’s heroic quests, gearing up or running through flashpoints. We are a fun first guild.

How did your guild come about?.
The core of the guild consists of a group of friends from Colorado. The other members are people who we have met over the years playing various games, but mostly WoW. The majority of us no longer play WoW, but the temptation of a Star Wars game, let alone an MMO was too great. Our powers are weak.

What kind of play style do you focus on? PvE, PvP, RP:
We mostly focus on PvE although some of our guildies very much enjoy PvP. There are some aspects of RP, but I think at this point we are just focused on getting everyone to 50 and figuring out the game.

What is your guild set up? How do you run your guild?
We of course have the guild master and then about 2 or 3 people who follow. At this point, the guild is still fairly small. We plan to grow a bit and after that I’m sure a new structure will be put in place to accommodate everyone.

How serious do you play and/or run the guild?
Right now we are pretty serious about playing. Like I said before, the main focus is to get everyone to 50 and start recruiting a bit. We’ve actually started getting schedules together to create some sort of a raiding calendar. We are probably about a week or two away from getting the majority of the guild to 50.

Do you have ranks or a certain hierarchy in your guild?
Not at the moment. People do have different titles and can do different functions, but it’s not really necessary at the moment. With more people joining, we will create a more detailed hierarchy system.

Why did you choose The sith empire?
That’s a good question. We always played horde in WoW and plus the Sith just seem so much cooler. I think we’ve always leaned towards “the bad guys” when it comes to games. Who doesn’t want to play a bounty hunter?!?!

How do you approach Raid Planning?
Right now we have someone gathering everyone’s availability. Based on that information, we are going to create some sort of Raiding Calendar to try and accommodate everyone. The person doing it has had quite a bit of experience doing this sort of thing in the past.

Are you always open for new recruits or do you want to keep a certain guild size?
We are definitely open to new recruits now. We don’t want to get too big because we like to stay close with each other, but right now all classes and levels are accepted!

Age Requirement?
I would say at least 18. Sometimes guild chat can get a little “mature” as far as conversation goes. The majority of us in the guild are 21-28.

Guild size?
Right now I believe we have about 25 or so total members. Now that is including alts. Usually there are anywhere from 5 to 8 people online at a time, but we hope to grow that number very soon.

What makes your guild stand out from everyone else? What makes your guild unique?
We like to have fun. Bottom line. Yes we take the game seriously, but we are a fun first guild. People have lives (at least most do) outside of the game and we understand that. Playing these games together is a way for us to have some good company, and enjoy playing a Star Wars MMO. We are also pretty up on our Star Wars lore. We like to pride ourselves in that.

What do you think of the game so far?
So far I’ve really enjoyed it. I think the storytelling is awesome. I think people need to relax a bit about the bugs. I think people sometimes forget that this game has been out like 35 days now. WoW has been out what, going on 5 years now? Imagine what this game will be like in a year, let alone five. Yes the bar has been set high, but Coruscant wasn’t built in a day.

What Other Games are you currently playing as a guild?
Right now this would be the main one. I know some of our members play League of Legends every now and then. We also can be seen on Xbox LIVE everyone now and then. I know a lot of the guild plans to play Mass Effect 3 when it comes out.

If somebody is interested now how and where can they apply for membership?
They can either send an e-mail to TonyS7705@gmail.com or SPCook@gmail.com. If they would prefer to do it in game, they can send a message to either Krezz or Tyan.

One last question, if there was one thing you could ask the Dev’s to include, what would it be?
Guild space battles. I think that would be awesome. I know they are working on some in-depth space stuff and I certainly hope that is one of them. Imagine participating in a space battle with your guild against another guilds capital ship. Once that capital ship was damaged enough, the party could land on the ship and start sort of a “mini warzone”. I think the space system has the potential to make this game very, very popular.