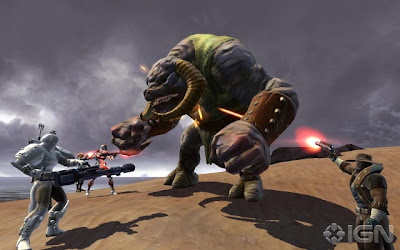 His first experience was playing the Sith Inquisitor class at last years E3 but wasn’t given the time that is needed for such an involving game, but luckily he was able to play a second time as the Jedi Consular the exact opposite of the previous class with much more time.

He experience an array of Force attacks that the Jedi is equipped with as well as he noticed that the Force Points regenerate with out the need of Mana potions.  As a fellow gamer he barked upon some kill and gather quests that for him didn’t seem to bother him at all which in other games are known to be quite the chore.

“My experience with the Consular was ultimately far more positive than my brief time with the Inquisitor. This could easily be chalked up to simply having more time to understand what I was doing, and being able to settle into my environment a lot more, but combat also seemed much more responsive.”

There are hints that disguise themselves as green walls letting the player know that a story arc was to appear if you continue to head down that direction.  All in all he had a wonderful time playing the game and realized that soloing the entire game is possible but since it is a RPG why bother, run deep with your friends, and rip your enemies a new one.

Read more over at IGN