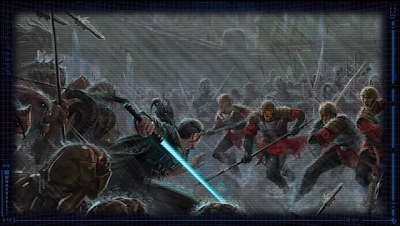 Is there room for 2 incredibly powerful MMO’s on the market, can Star Wars: The old republic out shine World of Warcraft where every other MMO has failed to be #1? Maybe…

It might be too late though, with WoW already being as big as it is. But we’ve seen game play after game play in anticipation for Sw:Tor to shine brightly in our hands making us the rulers of our own destiny with a lightsaber or Two.

If Tor cannot succeed in drawing you in as promised with it’s epic story telling than we might see millions of dollars and hours just thrown away, but I’ve always had faith in the Bioware franchise ever since Balder’s Gate pretty much the only thing I do have faith in.

“So where does that leave EA and BioWare Austin? Possibly up a creek given how much money has reportedly been poured into the game’s development; the massive amount of voice acting alone will make it much costlier to develop new content, which is the lifeblood of any good MMORPG. And given how difficult it can be to achieve a clean MMO launch, there’s really no margin for error if EA truly wants The Old Republic to become the long-lasting megahit they seem to be envisioning.”

Here is Kat Bailey from 1-up with her Unbiased Opinion about the Future King.