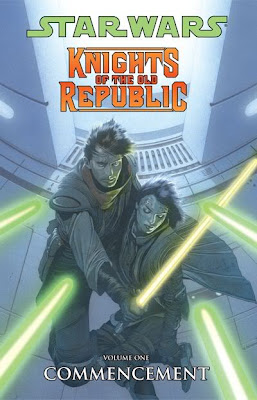 Was Commencement a good starter for the entire Knights of the Old Republic series? Read on to find out!


Going into Commencement, you may think that you need to have played the actual Knights of the Old Republic games to understand what’s going on in the comic. But almost as soon as Commencement begins, it becomes obvious that this is not the case; Knights of the Old Republic stands so well on it’s own feet that even if you have never heard of the games or played, you can read this and understand what’s going on incredibly easily. There are references that only the people who have played the games will get, but understanding these isn’t absolutely necessary – it’s only an added bonus.


One aspect of Commencement I just loved was the characters; they were all so entertaining, and the interaction between them all is great. Zayne and Gryph as a duo I loved especially; the humour there is endless. I also loved Jarael – her personality is appealing, and she’s an Arkanian! Not just another random, brown/red haired human female! That’s a win in my book.


The Jedi Masters on Taris were interesting – I mean that in a good way, too. I found them a bit irritating at times because they’re just so un-Jedi like, but not enough to really dissatisfy me with any parts of Commencement. The thing that seemed the biggest stretch to me, as well as the most un-Jedi like thing, was after they had their vision of a future Sith Lord; because the supposed Sith Lord was wearing a space suit in their vision, and their Padawans were then on an assignment that required wearing spacesuits, they immediately assumed that the symbolism was that one of their Padawans was going to turn to the dark side and become a Sith Lord. Thinking this, they immediately reasoned that they all must die. Of course, the Masters didn’t factor in that THEY were wearing space suits too, so… especially since they had just plotted to kill the Padawans, one of them could easily have been the ones to fall to the dark side after that and become the Sith Lord they saw. Yeah, you guys really didn’t use logic when figuring out that vision, did you? I guess I understand why they felt so much urgency, but still, I found it a bit weird.


One specific thing I found interesting was that the Jedi were allowed to see and associate with their family; I thought that was still against the rules during this time. Especially since they teach the Jedi of this time not to fall in love at all – one would think if they went that far, they’d guard against any strong kind of love at all, which includes family relationships. This isn’t a complaint at all, just my own thoughts on the subject.


I also thought the art in Commencement was very good; with comics, if the art is really bad or irritating it just turns me off completely and sours the entire experience, but this was certainly not the case with Commencement. Some of the panels were just fantastically drawn, one of those panels being the two-page picture of Zayne looking in on the Masters as they stand over the bodies of the fallen Jedi. But then near the end… I don’t know what happened, I guess another artist took over for an issue or two, but the art turned horrible. I’m not even exaggerating, it was terrible. Luckily it didn’t last long, but it took me by total surprise because suddenly everyone looked – worse.


Aside from that slightly terrifying art experience, however, Commencement is very visually appealing.

The story is solid and original, and thoroughly entertaining to boot; even withCommencement only being the first volume, you almost immediately care about what’s happening and always wonder what will happen next.  Some of the scenes are very emotional, and it all contributes to just a great story experience all around.
So, to wrap it up, I really enjoyed Commencement; it was a great first volume with fantastic characters and very satisfying storytelling.  I haven’t read any of the Kotor comics in awhile, but re-reading this actually makes me want to start reading the series again.  I would recommend this to pretty much any Star Wars fan, especially comic-lovers; you need no prior knowledge of anything to understand and enjoy it.