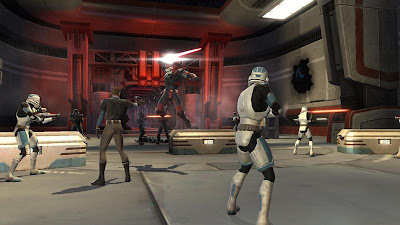 If you’re wondering what the flashpoints are going to be like in SW:TOR, two IGN editors set out to give us a recap. As we know, all great MMOs need group content and flashpoints are one way that SWTOR will bring that to the players.

There have been a few early impressions about the flashpoints already but no one can tell exactly what these instances will be like until they have tried them for themselves. Two IGN editors give us an honest, inside look at the world of Flashpoints that’s fun to read and revealing at the same time.
IGN Editors Dana Jongewaard and Nick Kolan spend some time in the first Imperial player Flashpoint encounter and they write about it in a 1200-word article on their site. Here are some highlights:

Nick: The first thing that sticks out to me is how the flashpoint began. We’re in this big ship and, for whatever reason, we end up talking to the captain. He says something about taking this comparatively small craft that we’re on and using it to try to destroy a Republic starship.
Dana: I too don’t glean much beyond “go kill these other guys” because I’m just trying to beat the other three party members in the conversation. Which is an interesting potential problem with TOR — does making social conversation into a mini-game mean people will miss what’s going on because they’re too focused on “winning””?
Later…
Dana: When we enter the room with the giant droid, three of the four of us retreat to a corner of the control room to strategize the best way to tackle him. Unfortunately, the fourth party member runs right on in and pulls in a bunch of smaller enemies as well, and then gets himself killed. Thanks, buddy!
Can anyone say “Leeeeerooooooyyyyyy!”
Nick adds, “Protip: Make sure your allies are ready before you try fighting a boss.”
They go on to describe the boss encounter and the group mechanic, which they do with no healer. Hey go through several mobs and smaller bosses throughout the ship which they describe as fairly easy. Then they go on to describe the end boss.
Dana: At first I don’t realize the Twi’lek chick is the boss herself. She looks so small and unarmed, and totally not like she’s going to kick all of our asses.
But they go on to describe how the boss was challenging but in the end they won. Very little is revealed about the storyline, perhaps intentionally and there was some comment debate over whether or not this preview was accurate or beneficial.

The way I see it; they’re too people who got to play a part of the game that I didn’t and I’m certainly interested in what they have to say about it. It’s a fun read and just one more piece of the TOR puzzle for those of us still anxiously awaiting a release.