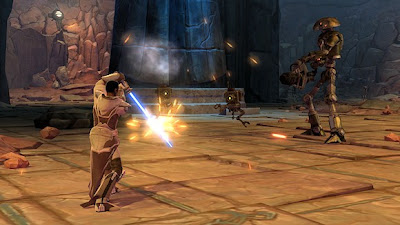 Reviews are still pupping up all over the interwebs. With in the last few hours, Massively, VideoGamer, Eurogamer, and some of the more “hardcore” Star Wars the old republic fansites such as DarthHater and TOROCast has posted their reviews of the Jedi Immersion Event.

Here is an update and a snip from each site.

Firstly we got Massively that spoils us with a long review plus a few ingame movies:

And for the people worried that SWTOR is going to be a Star Wars-themed World of Warcraft, you can rest easy too. The dialogue system guarantees that returning to your quest-giver isn’t just a mad dash of clicks. Your quest choices actually matter. The NPCs talk to you, and you’re going to want to talk back. I never once had the urge to skip the quest text (in fact, I was terrified I’d miss something if I looked away!), and while sometimes I felt as though I were performing menial tasks in between watching a really awesome movie, I didn’t care, because it was a really awesome movie (and the menial tasks were amusing too)

Next up we got VideoGamers SWTOR Preview. VideoGamer was one of the first to post their review today and is not as long as many of the other reviews of SWTOR:

The game gives you eight stories to pick from, naturally based around your playable class, be it Bounty Hunter, Sith Warrior, Imperial Agent, or Sith Inquisitor for the Sith Empire, or Trooper, Smuggler, Jedi Knight, or Jedi Consular for the Republic. Unlike older MMOs these classes aren’t limited to your standard Healer/Tank/Melee DPS/Ranged archetypes, and instead can be customised by the user, meaning any character can fill any role in a party – something that the genre has been moving toward in the last few years. 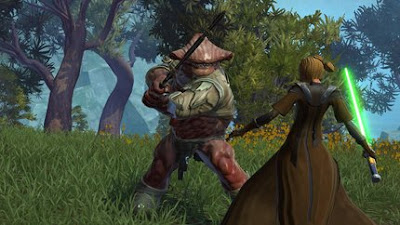 Eurogamer has todays most negative interview imo. Judge for your self if you agree with them:

Once again, pacing is an issue. It’s a longish instance, over an hour, and there’s a lot of running back and forth, backtracking along nondescript gangways and endlessly clearing trash (to use the dungeoneering term for disposing of middle-ranking groups of enemies). Boss fights are few and far between and, barring the final encounter, don’t have very interesting mechanics – but to be fair, this Flashpoint is from early in the game.

The loose class designs – all are strong damage-dealers and fairly durable, all are able to revive comrades – don’t seem to interact with each other in particularly interesting ways, and no strong co-operative dynamics came to the fore. It’s still an enjoyable run, but perhaps more reminiscent of an indiscriminate action-RPG blast than the tight, clearly-defined tactics of MMO tradition. 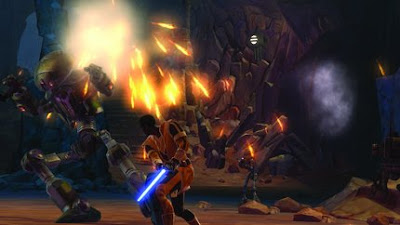 Torocast has so much info and so much information and  interviews that I will cover them in another post. Darthhater has some of the same interviews as Torocast – check em out here

There has also been a few Non-English SWTOR Articles popping up today. Here are the articles w/ the English Google translation.