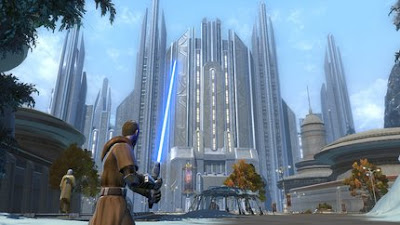 NowGamer had a chance to sit down with Daniel Eriksson and get some community question answered. Here is a snip:

You’re entering a market that’s dominated by World of Warcraft – other than the license, what’s going to draw players to The Old Republic?

I really think the unique selling point is going to be the storytelling. One of the great things about storytelling is it’s universal, it’s easy to get into – when you first played it you just clicked on a guy and started making choices in a dialogue, and it was easy to understand how to do that. It’s a great way to very gently introduce somebody to an MMO that has maybe not played something like that. Because we’ve taken the focus off the grind and the levelling, if you’re not that sort of player you can play our game for a couple of hours and put it down and not feel like you’re chasing the hamster wheel. We’d love to grab all the MMO gamers and all the RPG gamers, but also people that really have not come into the MMO space because it might still be a bit intimidating, it might not have the appeal. It’s really what we’ve seen with some of our other stuff – Mass Effect was literally ‘hey, let’s make a story-action game’.

The Old Republic’s visuals seem a cut above the average MMO technically, and we noticed the dialogue wheel was very BioWare-looking – how important are these elements in reaching a new, potentially non-MMO, audience?

We leverage all the things we’ve learnt before – there could not be a TOR if there hadn’t have been a Mass Effect, or Dragon Age. In fact when we made the decision to go with the player voice over, which was a huge decision, we had to cast 16 of the best actors we could find for the biggest roles in gaming history. When we did that, luckily we didn’t have to do the R&D that was done on Mass Effect to figure out how to have player V.O. and not have it be boring when you listen to the thing you just picked. That was a lot of R&D that went into that paraphrasing system to begin with. Lucky for us we got to go ‘we’ll just do that’. You may have seen games that have tried to do it since, and not worked very well – not only could we do it, but we could go to the Mass Effect guys and say ‘what are the rules around this? What makes this work?’ It’s more than just writing a short version of a line. What makes it accessible, what makes people understand what they’re doing? We had to leverage a lot of expertise to put it together.

Speaking of audio, there’s a ridiculous amount in The Old Republic, right?

Sith characters get to enjoy the requisite powers...