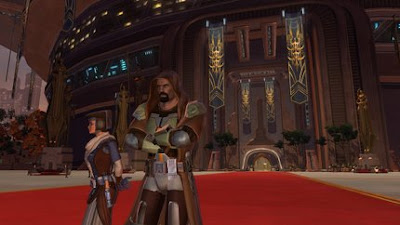 The press embargo holding back details from BioWare’s recent “Hands-On Days” in Europe and the US got lifted yesterday. This means we can expect tons of articles through out the rest of the weeks, showing new game play etc. Yesterday we had the pleasure of reading IGN’s 5 hour game experience of Star Wars: The old republic and today GamespotUK brings us a “Hands On” of the Jedi Consular and Multiplayer Flashpoints.

On our quest for artifacts, we encountered an illegal colony of Twi’leks–the Star Wars universe’s tentacle-headed humanoids (the same race to which Return of the Jedi’s Bib Fortuna belonged)–who were missing their village protector, a reclusive Twi’lek wilderness expert who had apparently discovered the most ancient secrets of the Sith and nearly killed us by collapsing his remote cave home down onto our heads. We tracked him down to a hidden Sith shrine inhabited by Sith disciples and were challenged to take massive damage and movement penalties in exchange for the health and safety of civilians imprisoned there. Because we were playing a goody-two-shoes character, we always opted to suffer whatever painful penalty was offered in dialogue to spare the civilians’ lives until we reached the tomb of the fallen Jedi, at which point our time with the consular’s initial quests ended.

Fortunately, that wasn’t the end of our play session. We returned later to jump back into the game with our consular, which LucasArts staff advanced to level 10 so that the character had all the powers we’ve described previously, plus the ability to heal herself and others. We took this character into the flashpoint, one of the game’s action-packed set-piece sequences that often requires lots of challenging battles and careful decision-making when participating in the game’s group dialogue system–a system which engages your entire party in a key conversation with story-critical characters. All players in a party can participate in dialogue, but only one player’s dialogue option can “win” each branch of dialogue with those characters–for instance, when confronted with a character who is withholding information from you and your buddies, you may choose to try to be threatening, while one of your friends might instead try to gently coax the information out of your contact. Exactly which character ends up speaking for the part at that juncture is determined by various modifiers (such as different characters’ ability scores, alignment, and other variables).

You can read the rest of the article at Gamespot