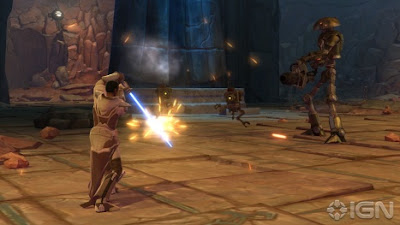 IGN had the chance to play Star Wars: The old republic for 5 hours ( the bastards). From that came a pretty interesting article that’s worth a read:

The setting for questing is Tython, the starting area for Jedi Knight and Jedi Consular players. As tends to be the case in many Star Wars games, you don’t start out with a lightsaber. The iconic Jedi kill stick must be earned. As the Knight class, my focus is combat. I have a training sword that buzzes with energy but doesn’t glow like the saber. Initially I can use a Strike skill to deal instant damage to enemies and build a focus meter. This can be followed up with a Slash attack that does more damage and consumes focus, which forms the central combat mechanic for the class.

Earning experience through questing and killing opens up more skills that highlight the Knight’s adeptness at close-range combat. One particularly useful skill is the Force jump. When triggered my Knight soars through the air and slams into the target, stunning it and building focus. It’s a good way to get a head start on a fight, especially in a group when a party member can get in a free hit while the target is reeling. The additional focus is also helpful for unleashing more powerful skills such as an overhead slash for higher damage. I can take advantage of explosive containers in the environment with a Destruction ability, which detonates them. And in case I need a break from the back and forth of melee combat, I can trigger Saber Ward to deflect incoming attacks for a short while.

Read the rest of the article here

Also remember to watch this short video they included: