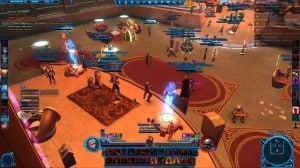 Recently we brought you news of the “That’s So SWTOR” Screenshot Contest on Reddit and there is now officially a winner of the 2400 Cartel Coin card giveaway.

Her submission can be found here: http://i.imgur.com/vxzBBvh.jpg

The contest host explains why she chose this as the winning entry:

really feels like what I wanted out of this contest. The picture is alive! Lots of people being social, some guilds, some not, some republic, some inperial. Just wonderful. There’s lots of different things going on, too, but it’s still very easily recognizable as the Star Wars universe. Twi’lek Holodancers, lightsabers, droids, a Nar Shaddaa cantina… and that’s totally a holo-rancor in the back!

It really just jumped out at me, but it definitely wasn’t the only one. I really loved a lot of the more cinematicly themed ones and the beautiful landscapes. So many great pictures! It was not unanimous and was put to a vote of a few top picks.

For those wondering, I chose to disregard the inclusion of a UI in any screenshot. This contest wasn’t necessarily about finding a perfect shot and taking it. I wanted to see what you guys have been through in the past year and a half and see what you’ve all documented with that print screen button.

Sometimes the most memorable experiences are captured with a UI up. That doesn’t make the moment less special.

Anyways, congratulations, Tacogoat! I’ll be sending you a PM regarding your prize!

And keep an eye out, guys, I’ll try to do something like this again in the future. If anyone would like to donate anything for a community competition like this, send us a message. Otherwise I’ll host another one next time I have an extra $20 lying around. 😉

Judging by the comments, some people weren’t so happy with the results. But it wasn’t their contest so ultimately they can take a hike, right? For curiosity’s sake, do you agree that the winning screenshot shares the spirit of SWTOR? If you were entering the contest (or if you did) what screenie would you share? We want to see them and we want to know what you think would best depict SWTOR in one image according to you. Shout out in the comments!